In Melbourne with Gerard Menses the CEO of Vision Australia and David Thompson of Jobs Australia. 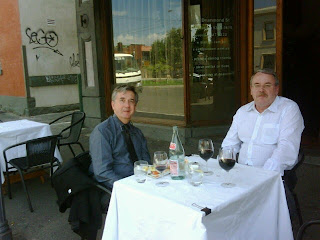 
Gerard is clearly an Oz version of my very own Chair- he has overseen 8 blind charity mergers! He is seeing my Chair soon, possibly before I do!

He has taken over the chairing of the Victoria peak body for the third sector from David. They have " peak " bodies rather than umbrella bodies here in Oz , (just to confuse my friend Robin Bogg I guess? )

David I have known for many years and I think this is the third lunch we have celebrated over the last 5 years. Why he even follows the Blog and was curious to know who this Robin Bogg fellow is ( aren't we all! ).

He knows my taste in fine wine and turned up with a bottle of Grosset, Polish Hill Riesling 2010 from the Clare Valley,SA. The Italian restaurant, Masani, has a BYO policy on wine. Now this wine is in Langton's top 100 wines of Australia- in the top 10. I can tell you it was superb and I went straight from the restaurant to buy a bottle to bring back to London. My top tip- get this!

We have a very Oz laid back lunch, sitting in the sun on the side walk - you get the picture!

David runs Jobs Australia which is a national network of tsos in the work and training world. The network helps members make the most of their resources to help the unemployed. Its a network funded by its members. In Australia, the third sector plays a massive role in providing employment and related services.

But there are problems with the contracting arrangements with Government. The contracts have become excessively micro- managed. The technology allows government contract managers to interfere with indivual's prorgammes. So , for example David told me a contract manager will ring about "Fred Smith" and want to know what action is being taken to implement sanctions for not attending a course or interview.

The system has become dominated by political worries on the work shy and the need for sanctions and the third sector has been steadily drawn into a punitive system not of its making. There may be a message here for our own sector as we increase our role in provision and as the Government get more aggressive about the so called "work shy".

We talk about the problems we now face in the UK sector. Chaos as David describes it. He wonders if leadership will be tested as CEOs face up to running organisations in hard times when they have had 10 years of relative plenty. Of course the cuts will test the mettle of all our leaders,but the problem is that some of the cuts are so severe and stupid that really good, efficient and excellent organisations go to the wall. Once a third sector body goes it can't be brought back. So I argue mergers and partnerships will be much more to the fore than previously. Gerard, who also oversaw a coming together of many anglican care chariites before taking on Vision Australia much agrees!