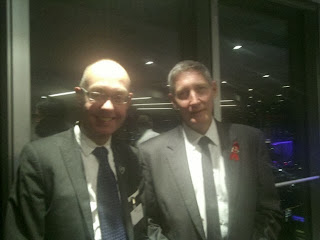 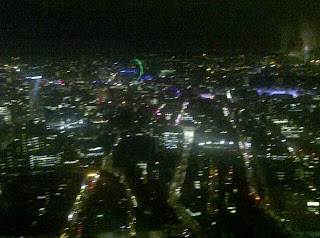 
An early morning start today (I hate early mornings), for breakfast in the Commons with a key MP whose identity I will protect! An unhealthy bacon butty but no doubt I'll walk it off over the day...

The main event was the launch of the acevo/Shaw Trust report on the Work Programme (WP), "Refinement not reinvention". Worth reading - you can find it here: http://www.acevo.org.uk/document.doc?id=2623.

It was good to get the new Employment Minister Esther McVey to the launch in Whitehall. And doubly good to get the opposition shadow Stephen Timms along as well. Rather impressed with Esther; someone who has had a real job before the Commons, in her family business in demolition and then in media and in various TV programmes like Channel 4's "Nothing but the Truth" (as I said in introducing Esther; useful for DWP in particular).

The key point for the third sector is that whilst we know many of the shortcomings of the WP (and there were many in the design of the programme), the architecture can work.  In designing the new contracts for 2016 we can learn from how the WP has gone, and change it, but we don't want it all to be abolished. That will create more uncertainty for the sector, not to mention the consequences for those we are trying to help.

I had a word with Stephen Timms afterwards to make that point, especially in terms of Labour's job guarantee proposal, but the programme can be built on that.

On from the Launch to lunch with Michael Pragnell, who Chairs Cancer Research UK. We were getting together to talk about the whole CEO pay saga, but more widely to discuss the work of one of the world's most prestigious charities; the research that is going on into cancer cure and prevention is remarkable.

Nail in coffin of Lobbying Bill?

The Commission on Civil Society (www.civilsocietycommission.info), chaired by Bishop Harries, has produced its first report today. My Chair Lesley-Anne is a member. The report clinically dissects the Government's arguments that this is not a threat to civil society's right to engage in public debate at election time and our right to speak truth to power. And its proposals try to make the most of the opportunity the Bill gives us, to help write better election law.

It is now down to the Lords to argue that more time and consultation is necessary to get this right. It's clear the Electoral Commission have grave doubts about the workability of this Bill so it must be right to pause and consult. There is time to do this. Let's hope wise counsels prevail and the Lords do their job as the revising chamber.

Here's a copy of the report
Posted by Sir Stephen Bubb at 09:56 No comments:


At my brother's house in Richmond on Saturday evening and much complaining about how serious the Blog has got. Hardly surprising when the Telegraph started serialising extracts from it over August I said, particularly the unkind suggestion it’s “Pooterish" (you have to be old to get the reference; I did the book for O levels)!

My nephew Alexander was celebrating his birthday and imminent departure for a teaching post in Sweden.

I recently spent a weekend in Lincoln, partly to visit the tombs of my 18th and 19th great grandmothers (Joan Beaufort and Katherine Swynford) in Lincoln Cathedral. The streets there still have a high proportion of independent shops and I spent a happy few hours buying local cheeses and market produce. But my top purchase was a Magee tweed jacket from the antique clothing store. Much sought after I was told! And indeed family were so admiring of the jacket on Saturday I bought another one that I spotted on the Herne Hill Sunday street market. This was a Brook Taverner, apparently the bee’s knees in tweed jackets. And as the weather was particularly autumnal today I wore it into the office. Tweed highly suitable for windy weather I thought. And let's not forget the Harris tweed flat cap that sets it all off; makes a change from a grey suit surely though I'm not turning up at No 10 like this.

I even arrived bearing gifts for staff who had battled in; grapes from my vine at the cottage in Charlbury. Not exactly mammoth sized but highly tasty.

By the end of today I will have appointed my new Director of Policy.  Blog announcement expected soon...
Posted by Sir Stephen Bubb at 11:02 No comments:

Watching the news about the furious exchanges on green taxes in the Commons, I emailed Tom Wright, CEO of Age UK and acevo member, to check what their position was on the elderly insulation subsidy.

One of the green taxes is geared to the elderly, and is the only subsidised energy efficiency measure in place. Tom said the government musn’t axe it without putting an effective fuel poverty plan in place. And as yet they don't have one!

Fuel poverty campaigners have written to the Prime Minister demanding cross-party action on the "national crisis" of cold homes. They said the UK was second only to Estonia, for people struggling to pay their energy bills, across Europe.

Campaign group Energy Bill Revolution - an alliance of charities including acevo members Age UK and Barnardos - said the biggest problem in the UK was "leaky homes". They called for investment in a domestic insulation programme, since "woeful" levels of insulation have left Britain falling way behind comparable European countries such as Sweden, Germany and the Netherlands.

“Our political leaders are falling over themselves to come up with headline-grabbing ways to cut energy bills, yet they fall woefully short of a true solution to the energy bill crisis. By far the biggest opportunity to cut energy bills is to fully insulate the UK's leaky homes. No other investment can do so much for so many. If the government is serious about solving this crisis, they must make insulating homes the UK's number one infrastructure priority."

Public Health England also set out its advice today, in its Cold Weather Plan for 2013, after four of the big six energy companies announced price rises.

Tom Wright said older people in particular were increasingly anxious about the cost of heating their homes. Winter health risks range from flu to falls - but the cold can also make heart and respiratory problems much worse. On average there are about 24,000 excess winter deaths in England each year, many of which experts say are preventable.

This new PHE plan has been produced in collaboration with the Department of Health, NHS England and the Local Government Association. It contains advice for the NHS and local government, as well as individuals. This includes having your flu vaccination if you are in an at-risk group (I'm having mine tomorrow!) , ensuring homes are properly insulated and making sure heating systems are routinely checked.

From November, the Met Office will issue cold weather alerts if the temperature dips to 2C (35F) or less, or if there is severe winter weather such as heavy snow or widespread ice.

So let's hope the Government listen. It would be a disgrace if getting rid of green taxes meant that the insulation subsidy was dropped.
Posted by Sir Stephen Bubb at 12:19 No comments: