Well, that was a night. Farrer's , The Queen's solicitors had kindly put on a reception to celebrate my recent Knighthood ( the gregrious Anne-Marie Piper our ebullient host ).

A grand selection of the great and the good and the not so. Both the current and the last Cabinet Secretaries, various media stars like Michael Crick, assorted sector gurus and board members mixing with old Oxford friends and members of the wonderful Bubb family.

My Chair made a lovely speech, which if I got the drift right, she used to liken me to the enigma machine and marmite! My own, mercifully short, contribution reflected back on the inauspicous fact that the last of my ancestors to be knighted got himself beheaded a few years later for upsetting Henry VIII ! This has not deterred me from speaking out on cuts!

Great to see Stuart there, coming with his own personal protection in the shape of Sam Younger, the CEO of the Charity Commission!

And here is a picture to treasure of the Knights of the not so round third sector table.... 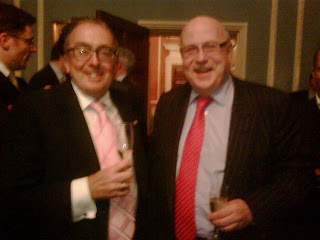 So a somewhat bleary eyed early morning start to get to Canary Wharf for a big Reform conference on the Big Society. I was on the opening panel , chaired by my favourite think tank leader, Nick Seddon.

Roberta Blackman- Woods MP talked about the Labour Party stance in a thoughtful and interesting speech. The Labour Party is starting a policy review of its approach to BigSoc. It needs to, as we are never quite sure whether its a " cover for cuts" or an idea they thought up and the Tories stole!

And I'm still celebrating yesterday's great news for the Social Investment Business of the endowment of the community builders programme. The good news was capped by Andrew Lansley anouncing yesterday that he is increasing the budget for the Social Enterprise Investment fund by at least £10m. This fund is managed by the SIB. So SIB goes from strength to strength; a major vehicle for driving up social loans to the sector.

No wonder the champagne was flowing last night! Much to celebrate in what is otherwise the slough of despond of spending cuts.

celebration tells me that this work is not hopeless. I thank you for this teaching with all my heart and lift my glass to human solidarity, to the ultimate victory of knowledge, peace, good-will and understanding.