All good things must come to an end and we are at the airport heading back to Heathrow.

But a splendid weekend ; a visit to the Opera House to see the Barber of Seville, Mass in the oldest church in Sydney ( St James ) and lunch with an old Oxford friend Rob Scoble. 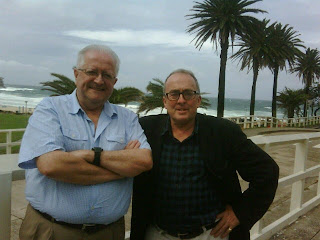 Rob Scoble and I at bronte beach

Rob is now a novelist and biographer. He is writing the first definitive biography of Baron Corvo ( Frederick Rofle ). As a present he had unearthed an old photo of me ( allegedly ). Here it is. 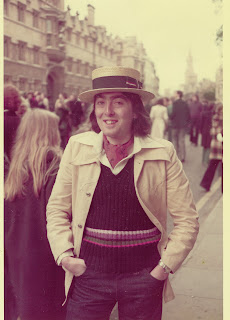 Note the fashion statement with the jumper ( or is that a tank top? ). Was that knitted by mother I wonder? Anyway a different era!

Coming away, the news is of the generosity of Dr Rob Brown, leader of the Greens and Tasmanian Senator , who has given his house and land ,Oura Oura , to Bush Heritage Tasmania, a non profit he helped establish to protect the wild lands of Tasmania. It is in this very house that he set up that non profit , with money from an environmental award 20 years ago and which has ever since been buying land to protect it from logging. Oura Oura ( it means the yellow tail cockatoo in the aboriginal language ) will be the trusts' 33 rd property covering almost a million hectacres. As the Sydney Morning Herald reports it ,

" nestling below a craggy bluff, beside a fern lined river, is an old weatherboard cottage. Home to platypus, perergrine falcons,quolls and bandicots and visited by Tasmanian devils and wedge tailed eagles.It's an idyllic location and one that has played a role in tumultuous events that have shaped the nation ".

It was a discussion around the kitchen table at Oura Oura in 1976 that led to the successful campaign to stop the Franklin river barrage ( see my previous blog from Tasmania ). From such small beginnings great campaigns can be unleashed. Such is the power of our great third sector.

As Rob recounts in the newspaper interviews,

" There were 16 greenies in beanies in the kitchen on a very cold last Saturday in June 1976. Activist Kevin Kiernan suggested we take the name of the great American environment group "the Wilderness society" and it was agreed. "

The Wilderness Society is now a great environmental charity in Australia and continues to fight for the protection of the environment.

Rob Brown recounts how he felt that he could not simply sit on his verandah enjoying his glorious mountain side property and its caliming views but had to get out and do something to protect such beauty for future generations by active campaigning.

A stirring story. But one that is so often repeated in our sector. Courageous and visionary folk who are determined to take on vested interests on behalf of us all. Whether that is the likes of Octavia Hill forming the National Trust or Sue Ryder and Leonard Cheshire founding what are now great and distinguished charities, or in previous ages the radical Tory MP who could not stand cruelty to animals and got off his backside to do something about it- founding what is now the RSPCA or another liberal MP who formed the campaign to stop slavery , William Wilberforce ( and vigorously opposed by the powers that be at the time!

Amusingly the Sydney Morning Herald reports the marvellous story of Rob Brown's gift alongside ( without any hint of irony ) a nasty piece of journalism where they report, shock horror, that many of today's green activist non profits have been receiving grants from the State government for projects and work to protect the environment whilst at the sane time daring to campaign for a carbon tax!

Only goes to show that our great third sector pioneers often have to take on an entrenched and viscous establishment to get justice and change!

So ,refreshed I return to the UK ready for the fight ahead! 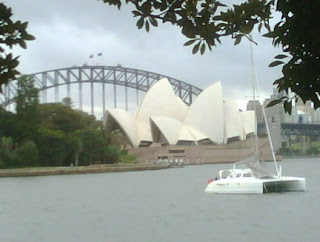 It was even raining in Sydney when we left- a friendly reminder of what probably awaits in dear old Blighty. 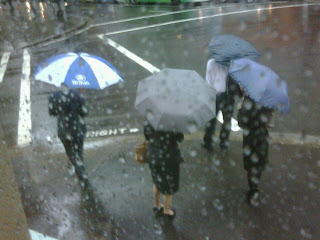