Good to see in the Times today a report from Rosie Bennett making clear that Olive Cooke's granddaughter wants to set the record straight; she is not blaming charities for driving her grandmother to suicide.  This rather puts some of the nasty and lurid press stories into perspective - and I recommend the article to some of those MPs who have decided that they need to "sort out" charity fundraising.

I also want to congratulate Alistair McClean, who runs the fundraising standards board on his deft and sensible handling of the issue.  He showed great skill in making the case for charity fundraising but recognising the broader issues it raises for us as a sector. As I said, it's something CEOs in fundraising charities will want to review and keep an eye on - and I'm glad Alistair is reviewing this in the standards board.  A healthy complaints process is good for those who have a problem but also for charities generally.

It's interesting that of late the media - or at least parts of it are much more willing to have a go at charities than before.  Probably part of the general questioning of those in perceived positions of power or influence. As a sector we should be careful in our response. The answer is not to fall overboard on "transparency". Yes, we need to be better at demonstrating impact and explaining what we do but that does not mean we reveal all, for example the odd suggestion that we might publish details of party affiliations.

And yesterday was another health day - for me and indeed the PM and Head of NHS England.  I had lunch with ACEVO member Dr Crystal Oldman, who runs the Queens Nursing Institute; a fascinating body set up in 1859 by 2 great Victorians, Liverpool philanthropist William Rathbone and Florence Nightingale.  The founding mission was to promote district nursing.  William Rathbone had seen the importance of having a nurse to care for his wife at home during her final illness.  After his wife's death he employed the nurse who had helped his wife to support other people who could not afford nursing care at home.  So started this small third sector body which grew into a national organisation setting standards and training nurses. Now such training is provided through universities and other educational institutions but the QNI remains a force in advocacy, campaigns and policy development.

Another example of the innovative and pioneering work done by the third sector.  There is no doubt that nursing support at home needs strengthening.  Indeed these days there is so much more that can be provided in the home that the NHS is curiously unsupportive of.  Try getting chemo sorted at home!  It can be done but hospitals like you to go to them!

Its was one of the underlying messages of David Cameron's excellent speech on a 7 day a week health service yesterday; we need to look more at how we support community health and care services and how we promote well being and prevent bad health.  Simon Stevens rightly focused on the challenge of diabetes. It already takes 10% of the entire budget.  It is clear that there is a growing problem of obesity amongst young people.  Many kids now coming out of primary school are overweight.  I think Simon Stevens is right- we will need to tackle this in many ways including legislation and regulations on sugar and salt content, supermarket labelling etc. This needs a robust response and yet still our NHS is focused on providing a sickness service and downplays the role of prevention and community support.
Posted by Sir Stephen Bubb at 17:09 No comments:

The Dilemma of Fundraising

The tragic story of Olivia Cooke has reopened the debate on charity fundraising. Many members of our sector have been talking about their own fundraising practice in response.

What we should do now is not apportion blame, but recognise this as the moment to take a hard look at our work, and particularly our fundraising.

Libby Purves made a good point in her Times column today:  "the nation's decent and reasonable rage at the case of Olive Cooke should be a shot across the bows of all fundraisers". Of course, charities need to raise funds. But the way we do this must be in line with our mission and purpose to do good.

ACEVO made this case in our recent report Good with Money. We argued that Chief Executives should be conscious of their organisation’s investment policy, and this policy should be embedded in the charity’s identity. Charities – and their CEOs – should be proactively transparent about these policies.

We can extend that approach to fundraising. We as CEOs need to be clear that where we have fundraising activities they are done to the highest standards.

With significant further cuts in public spending to come and a real strain on charity resources against rising demand charities do need to rely increasingly on the generosity of the public. We need to be sure that we do not damage our reputations through fundraising. And that any fundraising organisations who work on our behalf also adhere to best practice.

I was chatting to the manager of my favourite Helen and Douglas Hospice shop in Chipping Norton on Saturday and we were discussing this dilemma. Balancing the need to raise funds to support brilliant work but not hassling people to the point where they are turned off by the pressure of the fundraising effort.

Fundraising is important. Indeed it’s vital to the work we do: we need our fundraising community. But we need to make sure we’re doing it well – with the right purpose and methods. We need strong leadership in this area.
Posted by Sir Stephen Bubb at 17:23 No comments:

So it's started already.  Hardly the ink dry on the election result and some MPs already banging on about "Europe".  If this goes on like this, I will be one of those wanting an early referendum to get it over with. Whilst this is an important issue there will be many more key priorities for our sector, not least the attempt to abolish human rights legislation, attack charity campaigning, cuts to welfare and changes to the public sector. Some maybe positive, but not all.

As it happens I am at a Euclid conference looking at "Strategic Leadership in turbulent times" in Europe. Euclid was set up in 2007 as a network of European third sector leaders to provide mutual support and learning, and act as a catalyst for social change across Europe.  We meet in the great Catalonian city of Barcelona.  Parallels with the Scottish question as there is a strong Catalan independence movement but with a Spanish government determined not to grant autonomy or even a referendum.  One of my colleagues here is Pat Armstrong of ACOSVO, our Scottish sister organisation and we have been chatting! We will want to form a good alliance with the SNP on sector matters that come before Parliament. Not something we had thought we would be doing!

But interestingly, although the demand for reform is often couched in ultra English nationalist terms we do see across Europe a desire for less centralised, bureaucratic European institutions and more localism and decentralisation.  The cause that the government is espousing is one that many third sector organisations will recognise.  Reforms that devolve power to communities and away from Brussels are ones the third sector should support.  I'm pleased to see Greg Clark at DCLG as he has a strong and firm belief in localism but with a localism that strengthens communities and the third sector.  Not just councils.  This idea needs to be mirrored in a wider European approach.

Being in Barcelona, though but for a short time,  is a delight.  Our Euclid contingent is based at a hotel (modest as you would expect) near to the wonderful Gaudi Basilica of the Sacred Family.  I went to Mass there this morning in the small crypt, which also contains the Gaudi tomb.  It's a wonderful and exuberant reinterpretation of Gothic.  When I was last here some 20 years ago the roof was still not on. Now it is and indeed it now costs you 15 euros to see inside, where I remember walking around a building site for free!  Mind you ,they are still working on it! As you can see. 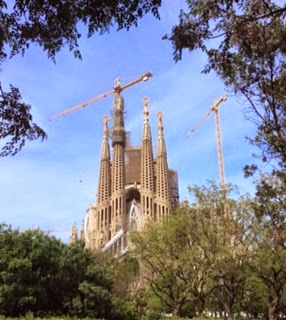 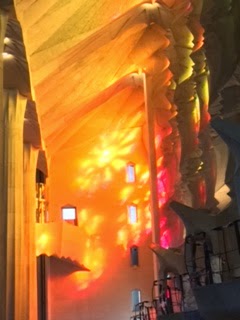 Posted by Sir Stephen Bubb at 15:27 No comments:

After the election, what now for civil society?

What a night. It was strange to be watching the results rolling in, sitting in David Cameron's constituency. Indeed I even saw his car – and the accompanying helicopter – pass as he went from his house up the road to the count in Witney.

To Cameron’s credit, he was the only party leader who spoke about volunteering and the third sector during the campaign. He made a radical proposal on volunteering rights in new legislation, which we strongly supported. His support for charities and social enterprise – and specially his emphasis on volutneering – will have been noted all over the country. I look forward to seeing it take shape in government.

Andrew Marr made a perceptive remark about Labour’s stance on the voluntary and community sector, when he said the party need to fundamentally rethink their approach, to think less of public sector workers and more about the role of charities and the community. I was shocked that Ed Miliband, who was our first third sector minister, made no comment in this election about charities and social enterprise or our role in society. Labour needs a radical rethink of its stance on the third sector. They were silly to ignore civil society and its role in building stronger communities. Let's hope the  Labour leadership contenders will put this right.

So, while these are early days, I am pleased by David Cameron's pledge, made in his speech in Downing Street, to build One Nation. This must not be only about Scottish devolution but also about bridging the gulf between the haves and have-nots, accelerating the public service reform agenda to give the poorest in our society real choice and care and supporting our world-leading third sector. One Nation means working with charities, campaign groups and social enterprises that bring people together, listening to them and supporting their leaders to make change happen. Our voluntary and community organisations must be unmuzzled and unleashed, for the good of our country.
Posted by Sir Stephen Bubb at 15:21 No comments: