It's been so hectic I even missed a blog yesterday! But an action packed one today as we wait to hear Ed's debut as Leader. And talking of Ed ( well most people are ) I have bumped into him a few times, including at Church!

I went to Mass on Sunday at Manchester Cathedral- beautiful singing- and Ed pitched up at end and said a few words. 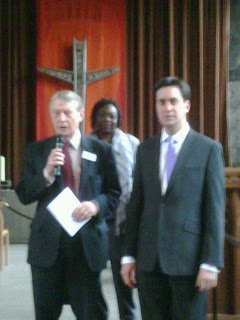 A leisurely Sunday lunch with the Third sector's top headhunter , the ever dynamic David fielding to celebrate my glorious decade, and then back into the maelstrom of receptions and meetings. First up was the EU reception, a dull but worthy event, and then onto the more exciting Care reception which was brimming with ACEVO members. I left when Any Burnham arrived ! Then onto Save the Children to show support for their campaign and to meet the new CEO. 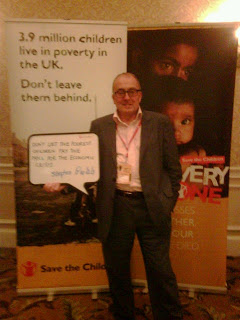 And then the fun really began with the New Statesman party in the gothic majesty of Manchester town hall. And Geoffrey Robinson was serving champagne. Nothing too good for the workers eh! Packed out with media , politicos, ex cabinet ministers etc. I even got introduced to a member of my own staff by a former Minister!

It was great fun to bump into " Red tory" Philip Blond who was not quaffing champagne but a beer ( surely some mistake?) And we had a good giggle about Big Society and the State- he suggesting I'm a " statist". Me!! As if. And there's me being roundly condemned by the trade unions for the opposite! 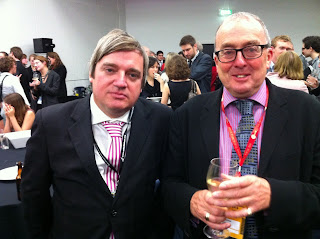 So from there to the Sky reception. The mere lack of an invite ( lost in post obviously) was not a problem in getting in. More champagne but by now it was past bedtime so I left.

Monday was meetings with members- good to see the new CEOs of the New Local Government network and of Guide Dogs and I went for a policy discussion lunch with Victor Adebowale of Turning Point.

The evening was a Demos fringe on public sector reform where I was speaking with an old mate Gordon Marsden , the MP for Blackpool and Tessa Jowell ( well I would have done but Tessa turned up at the end when we had broken up for refreshments.) A good fringe though , with an interesting debate on what stance labour should take on Big Society. I said it was simply not good enough to denounce as a front for cuts. And I said Labour had to decide whether they are on the side of the State delivering services or the side of beneficaries. 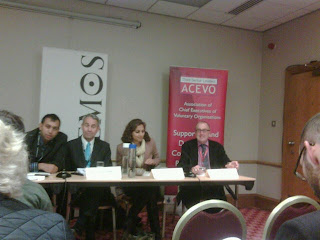 But the highlight of Monday night was the joint reception for third sector delegates that ACEVO and the union Community laid on. Community is a progressive union and their General secretary is an ACEVO member. I think we may be the only umbrella body that has a TU General Secretary! It was packed out. And a brilliant speech by Hazel Blears, who was spot on in saying Labour has to reclaim the Big Society agenda- not denounce it as a cover for cuts. She was followed by another former minister whe denounced Big Society as a cover for cuts. Doh!

Joe Mann , the union DGS said that talking of strikes was not a good approach for the unions. If only the bigger unions understood this. It is a huge regret that the unions have such a regressive stance to the charity sector. So it is good to show that ACEVO can work with a progressive union and that we understand the need for professionalism - which means good pay and conditions and opportunities for staff to progress. I get sick of attacks on us for suggesitng we treat staff badly. It is untrue and a slur on the third sector. So our joint reception was a bold demonstration that the attacks are wrong.

This was the very first third sector reception held at Labour as the General Secretary pointed out. We shall make sure it becomes a tradition.

My deputy Dr Kyle made an impressive speech. Looking very dapper, and every inch ( there are lots of them! ) a third sector Leader. Even when the lights went off and he spoke to a darkened room. I think delegates might have thought he was about to break into a raunchy routine. But no, the lights returned and much fun was had by all, including again the omnipresent Philip Blond. He and I then headed off for the Hot Ticket of the night; the Guardian Party. There was no champagne.

Mr Milliband was on the Radio today saying he does not believe in God. So, why was he at Mass on Sunday? Surely not chasing votes or am I a cynic?

Oh dear. I guess the attendance of Gordon brown and the demise of the reception must be connected?