Good to see all the publicity about the social impact bond launched today by the MoJ for Peterborough prison. My good friend and ACEVO member Rob Owen has been a driving force behind this initiative. The Social Investment Business is proud that it gave Social finance the initial development grant to work up the bond. It is a brilliant move. But it is essential it is not a one off. This bond is small scale measure against the need and the real ability of our sector to deliver big scale on rehabilitation if we have access to capital. This will require a big scale bank AND a finance sector that makes loans to charities and social enterprises. Scant evidence of that yet.

I was at the OFT seminar yesterday and heard the CEO of Capita explain that all surveys of staff show that " pay" is not the main reason people give as important in their job. As I pointed out to him , if that were true how come executives in top jobs in finance and commerce have such enormous salaries and bonuses and howl with rage if anyone dares suggest they pay more tax to support the state in its task of ensuring fairness. A point entirely lost on the apologists in the British Bankers Association on their trips round the studios defending the indefensible. These people have no shame. And somehow I think we can predict that the spending cuts are not going to affect these folk.

I just hope that the growing evidence of the problems of making cuts and ensuring fairness will make some impact. Our 370 CEO letter to Osborne and Alexander is important. I hope they see it as a way forward. 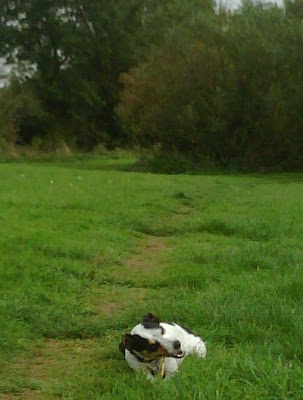 I have been in Charlbury walking the Hound( or rather the other way round) but taking calls from the Bishop of London and the Mail on Sunday amongst others!

I was discussing the" big society " with the Bishop. He is a marvellous cleric of the first order; great intellect , presence and superb oratory. He was explaining that The Church knows full well the problems of organising volunteers and the costs involved through the increasing use of non stipendaries. Volunteering is not effective without support and management. That is a cost. And he suggested that one of the problems we face is that the chartered accountants retiring and giving up their time voluntarily are doing so in the leafy suburbs, not Dalston.

As blog readers will know I have been asking members for stories about the history of their charities. I'm getting some fabulous responses. A marvellous book arrived yesterday recounting the near 1000 year history of St Johns hospital in Bath.

One email was interesting as it recounts on a little known strand of charity history; the municipal charities where the local council administered the charity, often with big endowments.

I have an email from Richard Eggington , ACEVO member ,who is the CEO of the Stratford Town Trust. He writes,

"This charity is one of those ancient (founded 1553) civic charities that were a joint operation with the local council. It’s been an independent charity since 2001 (since when it’s more than doubled the amount of money awarded in grants than was the case under the Council!). On an asset basis it’s about 120th wealthiest in the country with most of its assets still in Stratford property.

Thus until 2001 the Town Clerk was also the Clerk to the Charities.

• We know the name of every person who has held that post since 1553.

• The first Clerk, Richard Symons, lost three children to the plague in about 1557.

• We still have all of the archives and minutes (recorded in Latin in Symons’ fair hand) from 1553.

• It is said that until not that long ago, the Clerk was revered. When there was a meeting the Councillors/Trustees assembled first; then when the Clerk walked into the room, they all stood up!"

Now those were the days. Perhaps ACEVO should issue governance guidance to trustees that they stand up on the entrance of the CEO. Entirely proper don't you think. I'm suggesting it to my Chair! But don't hold your breath!