Al Gore may be a failed politician but he has found his role as climate change prophet and he even had a biblical qoute for us; " I offer you a choice, between blessings and curses". I assume that's Old Testament! Anyway he was talking about his new book," Your Choice", to be published on November 3rd ( remember you read it here first ). There has been a strong emphasis on action to clean up our planet at the conference, though too much of a focus on companies and not enough on political action and our role as campaigner and advocates in my view!

The first session this morning looked at the need for developing infrastructure. Kofi Annan 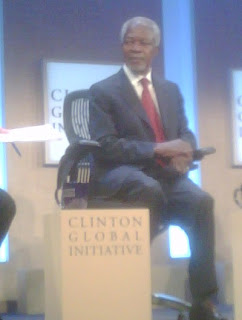 argues that Africa needs better infrastructure as much as it needs aid. He was clear on the need for sustainable development support and a major reform of trade rules to allow African countries to compete. As he said in his country-ghana- it can often be cheaper to buy imported tomatoes from Italy than the locally produced ones! In a sense this is exactly what ACEVO and Euclid are arguing in our Commitment proposal here. You need to invest in capacity and infrastructure if you want a successful non profit sector. We need a level playing field in the trade rules for delivering public services. To its credit, and whatever we might say in criticism of execution, the OTS have been prepared to invest in capacity building and this has made a difference. It is also core to the purpose of the Social Investment Business. I hope that as SIB grows we can expand into supporting development through loans in developing nations. At present we are limited to England. But we must be ambitous.
In my Tuesday blog I mentioned the great journalist I sat next to at dinner. Had another word with her and she has accepted my invitation to talk to members about responsible journalism. My superb head of Comms has dug out her Guardian article about her 7 day ordeal in Abu Graib. An amazing article. Do read it (click here). And it changed the course of her career towards arguing for responsible journalism. She wants to talk to ACEVO under the general title of " moments that change your life".... It should be fantastic. But only ACEVO members will get this opportunity!
The relentless networking takes its toll!And the jet lag is cruel to an old man! Last night's reception at the Museum Of Modern Art was a glittering affair ...I had better not list all the people I was talking too for fear of parody. Robin Bogg would have apoplexy if I mentioned Spanish Princesses...... But the conversation that I most enjoyed was with Bill Clinton"s speech writer. Naturally I took the opportunity to get tips! And as I flopped down on a sofa I found myself talking to the guy who founded comparethemarket. com. As in those fabulous TV meerkat ads! But let me be clear; I was restrained with all those weird cocktails. You need a clear head here!