I seem to remember, many years back now, that I liked flying. So it was great fun and excitement when I first came to Japan for a month when I was 28. But now, as I am older and crabbier, travel has become a trial. A 12 hour flight over night but arriving here at breakfast time when my body thinks it 1 30am is no fun. Trying to rest is so difficult and there is nothing left but to idle the time away drinking champagne until a befuddled and sozzled sleep descends.
Negotiating the train and metro into central Tokyo is an interesting experience but I find the hotel and get a few hours kip before I'm off to The British Embassy to see Her Britannic Majesty's Ambassador to Japan; David Warren, an old friend from Oxford days. Amusingly I have arrived in the middle of a typhoon which hits Tokyo with some force. Strong umbrellas definitely needed here Robin!
I have arrived at a particularly interesting time in Japan. They had an election on Sunday which has seen a seismic shift in politics here as the ruling liberal Democratic Party, which has been in uninterrupted power for the last 50 years has been swept away. The electorate have voted for change and the Democratic Party of Japan has taken power. It is good to have a perspective on all this from David. One of the issues I have been asked to address in my speech at the launch of JACEVO is how to tackle a change of political administration. The headline in "The Japan Times" shouts, "Bureaucrats jockey to face new management"! The story talks of thousands of bureaucrats" on alert and feeling anxiety" as they have to come to terms with promised reforms which will strip them of much power.
This is good timing for JACEVO, and they have strong links with the DPJ. Indeed they timed the Launch for the week after the election as it was widely expected the LDP would lose. One of the key advisors for JACEVO is a leading Liberal Party member, the Mayor of Nagoya who we dine with tomorrow. The new Government want to see reforms In public services and see a bigger role for non profits in this. And in a echo of putative change in the UK, the new PM here says he will be instituting a review of all Government budgets "from scratch".
In the evening we meet up with the Chair of JACEVO, Professor Ushiro and the person who will be its first CEO (who will be, in ACEVO fashion) a full member of the Governing Board of the new organisation. They already have 150 members and expect to be 300 by end of month. Prof
Ushiro explains that JACEVO will be the first pan umbrella body of the Japanese non-profit sector. Currently there are only sub sector specific bodies, those these will be represented on the ruling JACEVO Board. The website is up and running. See http://www.jacevo.jp/ 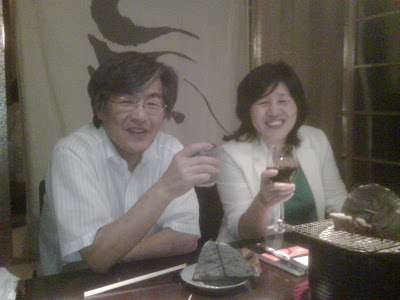 The meal is terrific; in a Japanese traditional style restaurant as we sit on the floor; Sushi and Sashimi and beef cooked in leaves on a charcoal burner on our table. However I resist the tempting offer of Saki before heading for bed at what is 2pm in the afternoon back in London. 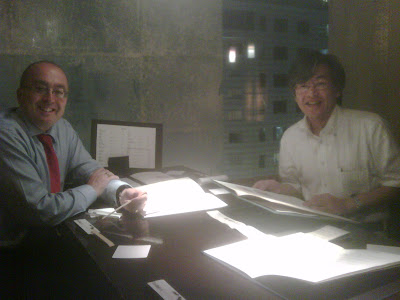