The Hope Institute is a think tank and policy developer with a serious practical bent: it is one of Korea's major third sector bodies. 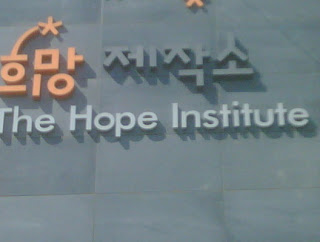 So although I'm on holiday I could not miss the chance of meeting them. And Geoff Mulgan has been here ( even staying in the same guest house-see pic below) so it has to be good; as indeed it turns out to be! 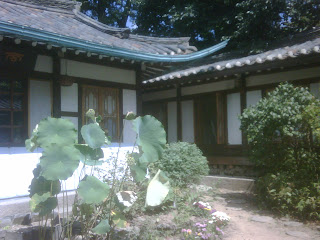 Their underlying mission is very attractive: "Beyond negative criticism, Toward positive and creative alternatives. "A motto that our own dear sector might take to heart.... There was an energy and excitement about the place I liked. They have some fascinating projects. Established by Mr Park Won Soon, a prominent human rights lawyer and founder of the highly successful campaigning group; Peoples Solidarity for Participatory Government . In 2001 he founded the beautiful movement, modelled on Oxfam and even with a shop for recycled goods and clothes . Wanting to really develop social innovation , in 2006 he founded HOPE.

A founding principle is that to support innovation you must have public participation by local communities and citizens. So they collect ideas from citizens and then turn the best ones into policy and get authorities to implement the idea. So far from the 3765 ideas they have had , 130 have materialised. Some are simple, but really useful, such as the notion that Korean banks should display the fee the ATM will charge before you make the transaction. It now happens.

Another was that the metro did not have hanging straps at different levels so children could not hold on. They launched the " handles for everyone", campaign and the metro now does. A lesson for London Underground? They have a Rumble Rumble Forum which brings together citizens and experts to discuss how innovative ideas can work.

There is a " Happy Seniors" forum which uses the talents of retired professionals to support non profits. There is also the Complaints choir! A Finnish idea , it brings together people who have complaints , they decide what " complaint" they like and then turn it into song! The process can be very instructive as people discuss their complaints and so inevitably what they might do about them! Then there is the Hope Academy; a development programme for elected officials and public leaders. Talking about the role of non profits and citizen and community empowerment. Courses may be 2 or 3 days or 2 or 3 months. Over 2000 have gone through this so far. See the website;www.makehope.org.

There is news from home! I get a note from the excellent, Guide Dogs for the Blind Chief Executive, BridgetWarr, telling me she will be stepping down in March. Theyhave chosen David Fielding at Tribal (by appointment headhunters to the third sector ) to search for her successor.I think this is a great role and given my passion for the Hound and my deteriorating eyesight I am very keen that they continue to go from strengthto strength. I have attached the link to thesite....www.resourcingmicrosites.com/guidedogsceo

Since 2004, Bridget has led the development and implementation of their 5year strategy 'Moving Forward Together'. She has helped bring aboutsignificant developments in the charity, including increased investment inthe guide dog service in order to help more blind and partially-sightedpeople across the UK to enjoy the same freedom of movement as everyone else. I have got to know Bridget well as she has been one of my board members at ACEVO. Its a top job. I'm sure they will get someone good.

Now its Pizza time, though I had a brilliant korean lunch courtesy of my hosts at Hope! Tomorrow its off to North Korea!