A Presidential motorcade is impressive! Obama has arrived in NYC and swept by the Hotel yesterday- streets closed off and a procession of cars , vans, ambulances and outriders precede and follow the 2 Presidential cars. He was in one of them. Its good to see from the big crowds that gathered , he still has a huge following , despite the aggravation he is getting over long overdue health care reforms. There were cheers as he swept by. He speaks at the Conference today. It will be quite something to listen to someone who promises so much for America and has brought the States in from the cold of the Bush years. 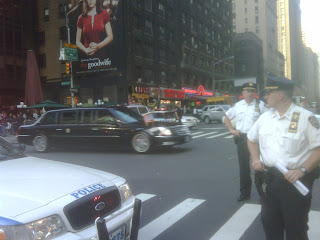 I have been meeting with members of the CGI and had my first mentoring! I met some staff from a Foundation who invest in start up social enterprise and we discussed the value of more access to capital for our sector. They try to bring together venture capitalists with bright new innovators, but I rather hope that we can develop our own non profit version through the Social Investment Business.

Today there is a meeting for all the world NGO members. But as a break I have to admit I sneaked off to see the major Kandinsky exhibition at the Guggenheim yesterday. A stunning display of the works of this genius , though the audio tour was the height of pretension; including extracts of Schopenhauer a composer I dislike; atonal and discordant. Too much of a reminder of aspects of our own dear sector at its worst! I like to think of our sector as a stirring piece of Wagner , calling the country to arms , though Elgar , who I understand is favoured in some sector circles, is far too passe Empire for my taste!

Headlines in the papers here yesterday reported on a coalition of US companies, investors and directors who are proposing a radica overhaul of executive pay and calling for the axing of practices like huge severance payments. Companies backing change include AT+T and Cisco. What a pity there is no such movement in the UK. Our corporate class appear intent on business as usual. What we need are companies who have CSR policies to look seriously at how they will reform their practises. They could learn from their corporate cousins here.

And talking of corporates, I'm hoping to catch up with an old college friend Miles Young , who is now the Global CEO of Ogilvy and Mather and based in NYC. He runs a massive PR and communications company. Be good to catch up - and pick his brain on how to promote the modern day third sector to a national audience!

I logged on to your blog in the expectation of gaining some insight into current Clinton Global Initiative thinking on improving global health, but am dismayed to see that rather than attend the world NGO meeting, you chose to slope off to an exhibition. As an ACEVO member who is the CEO of an international development charity, I am not impressed with this indication of a general lack of interest in members working in international development, and am further disappointed by your failure to consult the development NGOs before you announce you will be at the CGI meeting. Are you in NYC to represent ACEVO and its members, or represent yourself and take in the sights?

Anon,do you get irony? As it happens i registered far to early so had several hours before any sessions started so rather than doing nothing I walked up the road to the exhibition....( incidently acevo has a strong arts and heritage membership)so the insult about ' slopping off " is misplaced . If you knew me better you would never dream of suggesting i do not work tirelessly for my members and our sector. You will get plenty of insights as we move along , but please lighten up.