"No one can wall himself off from the world"

It was an impressive and powerful speech; and to see and hear Obama in person was a privilege. He electrified the Conference Hall and though you can catch these things on webcast or read them nothing is more powerful than being there. 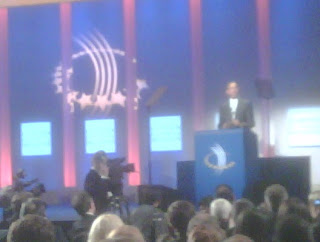 He spoke a lot about his and indeed his wife's work in NGOs and talked of his mother's commitment to a "spirit of service" which had inspired him from an early age. This could have been cheesy but it wasn't; it was inspiring . In introducing Obama, Bill Clinton had made the point that he had begun life in the non profit sector. Obama spoke about the lessons he learnt as a community organiser on some of the roughest streets of Chicago and how, " block by block, neighbourhood by neighbourhood , community by community" , they had driven change. Progress is made by people and if you want change then that is where you begin.
He spoke of the major drive he has inaugurated to encourage volunteering and of the Innovation Fund. He wants the Government to support and fund community innovation and seek ways to replicate it. It was with a real passion he spoke about our role in civil society , in tackling corruption and giving aid to create the conditions in which aid is no longer needed. A real shot in the arm for those of us who work in the non profit sector. Somehow I can't imagine one of our leading politicians talking so eloquently about our third sector!
In previous Blogs I have written about the work of Saul Alinsky and how he influenced both Obama and Hilary Clinton on community activism. It's interesting that his early influences and experience have come from this tradition , unlike the upbringing or experience of so many politicians. 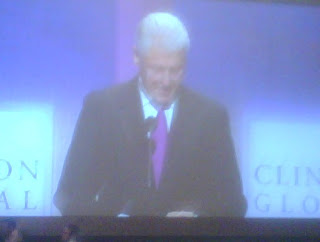 The other star for me was Bill Clinton. He compared and led the main 2 hour session today and his homely and relaxed style warms you to him. But it is his use of killer facts and superb examples to illustrate his argument that get across the message so well. It was a huge lesson on the importance of strong communications and the power of delivery. You can have a superb argument but if you deliver it badly then its wasted. I hope this is something I have got better at. Its crucial if you work with Governemnt. "Spin" is derided , but frankly if you want to win hearts and minds you have to be a master of communications. Clinton is a stunning exemplar of this.
Much of the session was on the need for a more sustainable future for the planet and the need for countries to embark on radical programmes to reduce carbon emissions and waste. But it was Clinton who made the point that this is about partnership between public, private and third sectors and citizens; one of the core messages of the CGI.
But first off this morning it was a meeting of some of the NGO members attending- and interesting to see the diversity of organisations, though not surprisingly they were predominantly American! The session was run by Ashoka and Microsoft. Ashoka- and they have a great London organisation -were excellent , but the Microsoft guy lost my attention when he announced that NGOs should not be like businesses. A sloppy, knee-jerk and patronising thing to tell us. Of course we need to be "businesslike" in how we work and operate, not in the sense of corporate greed but in demanding professionalism and a desire to make a profit we reinvest in our business. Interestingly I was one of the few infrastructure bodies present and I made my pitch that funders (microsoft please note) often love a project, especially if its with the really poor, but have little interest in developing the leaders of those projects. To make the point that Obama made, if we want to develop civil society we need to develop its leaders so that aid leads to poverty being eliminated.
I spoke to Selim Mawad who runs the Sustainable Democracy Centre in the Lebanon and he argues eloquently that in the middle east or the Balkans civil society is regarded as a threat and support for leaders of the sector is crucial if we want to promote fully functioning democracies. His project was set up in direct response to the need to have an independent and vibrant sector that works on behalf of people and communities. I told him about ACEVO's work in promoting leadership development in the non proftis of the third sector and said I would see what we could do to support him.
The evening rounded off with an " innovation dinner" hosted by Hewlitt Packard. A good dinner and lively presentations but I reacted badly to the message that innovation is simply about products and technology. So in best third sector tradition I insisted on making an unscritped speech on the power of " disruptive innovation " by the third sector. One of the things our sector is so good at is innovation in ideas and the way things are done. So the treatment of mental health or people with learning difficulties has been transformed, not by new technology, but by the campaigns and advocacy of many non profits who have shown there is a better way to work. I argued for the long tradition of our sector in campaigning for change- in attitudes and in culture. This is innovation. And as valid as new IT products. I believe in the value of partnership with the commercial sector, but there are times when our sector gets patronised and at those times I am not quiet.
Fascinating that I was talking to a number of people on my table who felt the same - in particular a fascinating journalist, Molly Bingham who has reported from war zones and who argues that the media has often been complicit in promoting a false narrative on war which has sold Government lines of propaganda. She has written on this and promises me the article; you will also have it when I get it too. My other dinner neighbour was a 24 year old entrepreneur who argues that we need more for profit answers to social problems and works for a Foundation that promotes venture capital answers to deprivation; probably something like Bridge ventures I guess?
But its this interchange that makes for such an interesting event. Not just the chance to listen to the giants of the political world but also the interchange of ideas and debate which is the core to peer to peer learning.