Amazing. I bump into an ACEVO member- and he also lives in Charlbury so he is doubly blessed ! Adam Leach , the dynamic CEO of the International Business Leaders Forum . It's good to see a friendly face. And then I bump into the Head of a Swiss foundation who also knows of ACEVO and our leadership development work. Part of the point of the CGI is to facilitate networks that then might develop into links and work. Misguided souls sometimes deride networking- one CEO even once told me its just one letter from " not working" and yet it is a core competence for any third sector CEO. I wrote a book on this with the great Hamish Davidson entitled . You can order a copy here.

Adam and I had an interesting discussion on aid v investment ie should we move away from donor aid and grants to loans and investment that build up organisations strength so they can grow themselves. He argues that this is a " bipolar cul- de- sac ". (I tell him I shall plagiarise this lovely expression.) In other words we will always need aid but we must also develop an effective investment market too. It mirrors debates on grants v loans. It is silly to pit the 2 as in oppostion. Indeed the model of investments we use in the Social Investment Business is to combine both and our business development grant scheme is there to help organisations work out if there is a case for them to move forward and to take a loan. What organisations often need is diversity of income streams- not dependent on just one source. But to be able to grow through loans is a new and exciting way forward for our sector.


Perhaps the highlight today was a session which included Judith Rodin, President of the Rockefeller Foundation talking about their work funding innovation. She extolled the virtue of what she describes as user led innovation. One of the bodies they fund is "Positive Deviance" (what a great title!) They explore how innovation happens so, for example they looked at the health of kids in a Vietnamese village and found there were 4 more healthy kids than the rest of the village. So they set out to observe these families to find out why. And they discovered that these families did not wash the small crabs out of the rice they were cooking, so these kids were getting a source of protein others were not. So they spread this lesson to others and so made a significant improvement in kids health. Simple but a great example of user led innovation.


She also spoke of the need for us to measure social impact. We need empirical evidence of what difference we make. But she also had a warning that such measurement must not lead to the exclusion of risk. We need to invest in things that fail. If everything is measured there is a danger we avoid risk. A timely warning. The Social Investment Business is looking at how we might develop measures for social impact and have a seminar planned in November with the brilliant Centre for Social Investment at Heidelberg. 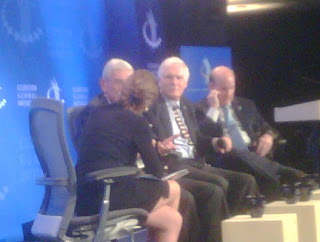 Fascinating to go to a session on "From CEO to NGO" and hear Ted Turner being quizzed on whether rich guys give enough (Ted himself having given 1 billion dollars to the UN - and the first person to ever give a billion to charity). I thought perhaps one day we will have a session on, " from NGO to CEO ", where a third sector CEO talks about going into a big company and turning it around. And having thought that I asked the panel that exact question. Perhaps the most interesting response came from Ted Turner who paused and said he had never thought about that possibility before but perhaps that could happen! I thought, not bad to have got that point across to a guy like him.

The person I particularly enjoyed listening to was former head of general electric, who has set up "Autism Speaks" in the US to campaign for autism awareness. When asked what the big difference between his job as a top Corporate CEO and running a Charity he said, "the perks and the pay really suck"! One of the other panellists said a big difference was also you have to be more democratic and suffer fools gladly!

Core to the CGI concept is the "commitment" process. Companies commit to goals to reduce carbon emissions or to supprot non profits in Africa for example and non profits make commitments to carry out work if they can find the funding through the network of CGI. One of the themes for this years CGI is about developing human capital and building infrastructure. So ACEVO and Euclid have put together a propopsal which I have been speaking about at this CGI. It is based on the concept- core to ACEVOs work- that a healthy civil society and effective democracy requires strong sector leaders.

The role of civil society has proven critical in the path towards democracy in the Balklans and Former Soviet Union. These are two of the regions where ACEVO & Euclid Network are already playing a key role in developing civil society by connecting and empowering its civil society leaders.

We plan to expand our projects and reach to the Middle East and Northern Africa this year, where links between civil society organisations and support for civil society leaders are currently underdeveloped and unexplored. This will involve connecting civil society leaders from the region to their European peers to encourage the development of a European civil society that goes beyond the borders of the European Union. We will also focus on improving the relationship between civil society organisations and governments in the region with the aim of replicating the success we have had in other regions on this front. We will be conducting the project alongside the brilliant Dr Ani al Banna, founder of Islamic Relief, Muslim Charity Forum, and the Humanitarian Forum.

This weeks news has been dominated by the continuing efforts to find pece in the Middle East. If we can help this by supporting the non profits in those countries we can make a contribution to that process.

Interesting thoughts ref aid/investment and grants/loans - fully agree that the Social Investment Business approach is spot on in terms of grants for the early work to be able to move things forward (or not) to the full loan.

Measurement of social impact - critical that this is developed but disagree that measurement would lead to an increase in avoidance of risk - if it does, the wrong people are assessing the opportunities (as risk comes before, measurement comes after). Undertaken correctly, social impact measures should sit alongside other criteria (e.g. including costs, resources etc) in any proposal/plan and the risks of success or failure against each measure assessed.
Assessment of 'failures' should (again, if the right people are undertaking the assessment) lead to a better understanding of how to measure performance (afterwards) and how to assess risks (before)...