Nagoya- Launch No: 2 and EU funding. 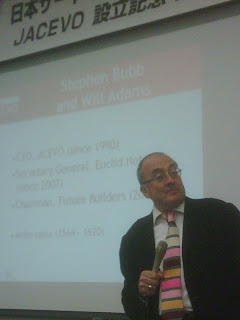 Another Big City. Another Launch. It goes well. The event is introduced by a newly elected Member of the Diet. A Democratic Party of Japan member, he was formerly the Mayor before my new friend was elected in April. When I talk to him later he says how much he admires Groundwork and the Scouts in the UK. Of course I am able to tell him both organisations are led by two very excellent ACEVO members, Tony Hawkhead and Derek Twine.

I also ponder with them the notion of JACEVO helping develop other Asian third Sector Leader networks. CHACEVO and KacEvo for example ! We know in ACEVO the value of peer to peer learning. Leadership knows no boundaries and a growing international CEO network for non profits has to be an amazing but possible ambition.

My blackberry photo shows Addarii-San and Bubb-San in front of the publicity poster for the event (I have claimed it for a souvenir!) and delegates listening respectfully to the Bubb-San speech!! It is though very hard to tell how my pearls are received; their tradition of respect means that no one would dream of not listening or yawning. But that also means you can't use feedback to develop your contributions.
That apart I am getting very comfortable with this Japanese culture of respect people bowing to me everywhere! And when the staff at the Launch come to load the PowerPoint or move screens it is all done in a crouching position. Must pass this tip on to our wonderful ACEVO Head of Events, Yemi. I am told that it is the custom here that no member of staff leaves the Office until the Boss has departed. An excellent notion methinks? But I guess it will never catch on? And perhaps getting staff to address me as "Dear Leader" is a step too far? Good job I am here for only two weeks or who knows what bad habits I may develop? Of course in turn I would need to bow to my Members as they are my Bosses! I'm sure they would enjoy that. 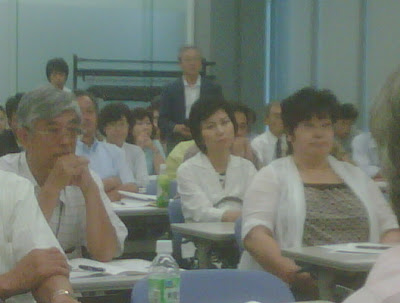 We have the morning free so manage to get out to see the Tokagawa Art Museum . It is a fine collection of artefacts of the Tokagawa family; one of Japan's leading aristocratic families. Tokagawa Ieyasu was the Shogun who employed Will Adams and even corresponded with Queen Elizabeth. His samurai sword is a greatly revered treasure. My good friend David Fielding of Tribal (the sector's leading Head Hunter has schooled me in the notions of the Japanese martial arts and the customs of the samurai. He is the only non Japanese to have won the International Aikido championships and has competed here many times. Quite an honour to have beaten the Japanese at their own martial art and on their soil ! No wonder he received an MBE for this single achievement.
We also have a valued evening free and I'm sorry to say I succumbed to the temptation of a Burger and ice cream (not together) ! But did also get to the gym and swimming pool in the hotel, so that's OK then.

And news from home- or rather Europe; from Euclid Network, our Pan-European sister organisation . This week they have become the only third sector body to be leading on developing solutions for the reform of European financial regulations. The EC is the largest donor in the world, contributing roughly €50bn per year to civil society, its financial procedures are allegedly the most expensive administratively and inaccessible in the world. Thanks to its contacts within the EC, Euclid Network has been invited to provide recommendations for the review to make the regulations more cost effective and third sector friendly. To take part in the consultation click here <http://www.surveymonkey.com/s.aspx?sm=mloZ9UemIUKW3sGuQlt1EQ_3d_3d> .

So for the many third sector bodies in the UK who have had EU grants, or want to apply - do take part in this consultation. Its important. ACEVO will want to get concepts of FCR and longer term funding fully embeded in the proceSs. These grants are important but often our members don't get full access because the process is so arcane and cumbersome. So Euclid, rather than whinge about it are doing something to change it for good. Help us do that !

"CHACEVO and KacEvo" - What a great idea, Stephen! But shame on you for trying to pass it off as your own, when you know full well that Charity Finance got there first, on 12 August no less:
http://www.charityfinance.co.uk/home/content.php?id=3070&pg=15&cat=30