The Fernando Botero exhibition in the Royal Palace was superb ; spoilt slightly by the chap at the ticket office offering me the "discount" price for the over 65s! Indeed later on the metro I was offered a seat by a very polite man- and then I discovered I was sitting in the section reserved for (as it explained in English ) "babies, handicaped and old". Botero is a fabulous contemporary Colombian artist. He is known, as the brochure explains, "for his style of evoking emotion through a new interpretation of human body with rotund form"!! 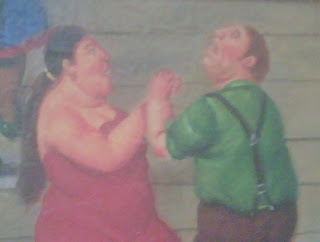 Earlier I had been on a tour of the Palace; the Joseun dynasty ( 1392-1910 ) was the longest reigning monarchy in Asia. And a thought for the day, not drawn from an American management text, appeared over the Royal Library. 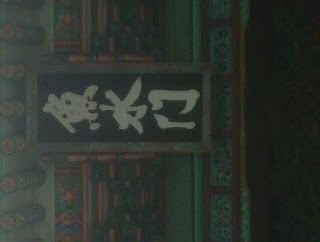 It says, in kanji : a fish cannot live without water. This was to remind the king to protect and nourish his people. In other words, a leader has no role without followers so you better ensure they are content! As ACEVO staff are obviously.
And I round off the day with a Buddhist temple feast- no less than 30 laquer or ceramic bowls set out before me. Quite what it all was is still unclear, though I got the chilli and pepper concoctions. Eaten to the sound of the monks. And drums. I have noticed Tom's Pizzeria around the corner from my rather splendid Hanok traditional guest house. I think I hear it calling. And I notice they even sit on chairs. Luxury.