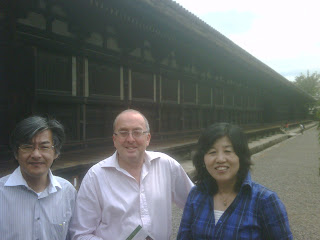 One of the most special places in Japan is the City of Kyoto- the Imperial Capital for over a thousand years and home to the country's greatest and most revered Temples. I remember it well from my youth when I cycled enthusiastically around the city viewing gardens and temples and living on cheap noodles!

The President and CEO of JACEVO with me at Kannon Temple.

Our Bullet train (and goodness are the trains fantastic here) delivers us in time to visit a Temple before the Launch event - I guess to give me luck and good fortune for the Speech. The temple of Sanjusangen-do is dedicated to the Buddhist Goddess of Mercy, Kannon with eleven heads and a thousand arms. This is a much loved National Treasure as the thousand Kannon statues and the main statue of Kannon were carved in 1250.

At the Launch I am struck by just how well informed the delegates are about our UK sector. I get questions on FBE and on our links with other UK umbrella bodies and it's clear they see our sector development in the UK as a beacon. I wonder if we fully realise how valuable this is as an export? It certainly gets scant attention in the FCO. There is plenty of money spent on trade promotion but this rarely includes the trade of the third sector! There is also real interest in the concept of the sector having wider access to capital and to loans.

This interest is in deep contrast with the recent article on the Social investment bank in Charity Finance I read last night on my trusty Blackberry. It's depressing. Well actually it makes me angry. Once again our sector has been offered a a golden opportunity and we are seem to want to flunk it. Some of the comments from members of our sector are, frankly, disgraceful. I despair at our lack of ambition and foresight. We have a once in a lifetime chance to take dormant assets and establish a bank that could dramatically grow our sector and increase its power and professionalism. Those who have been knocking the concept play right into the hands of the banks who do not want to hand over the dormant cash. One commentator is even suggesting taking dormant accounts and setting up an SIB might be illegal. Gracious, and I thought this was a sector that campaigned for change and against the status quo! Then there are those who argue there is not though demand to justify a bigger bank. Rather like English missionaries arriving in a drought stricken African village declaring the populace don't need more water because they are not drinking much. Deeply pathetic. What is our sector if it is not driven by burning ambition and desire for growth? And this is even without the niggling and squalid shots at others. Why is it some in our sector think it is better to squabble over the crumbs on the floor when there is a loaf on the table waiting to be grabbed? 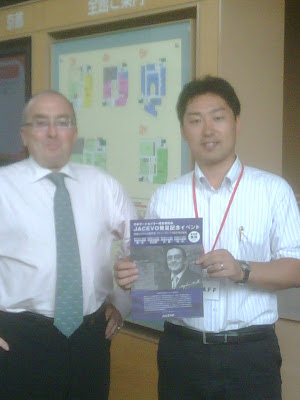 There is strong questioning of me at the Launch which is probably a reflection of Kyoto as the main seat of University learning in Japan.
One of the staff stands outside the Lecture Theatre with a poster showing me so here I am with him.
We are staying overnight in a charming Ryokan Inn, where we sleep on the floor in a room with most beautiful paper walls and delightful minimalist decorations. Incredibly elegant, though sleeping on the floor on a futon will not catch on as far as my back is concerned! In the evening we wander the old streets and are rewarded with the sight of three Geishas in their gorgeous kimonos - getting rarer in Japan these days I'm told.
Breakfast is a Japanese one - served in our room as we sit inelegantly (as you see here!) . 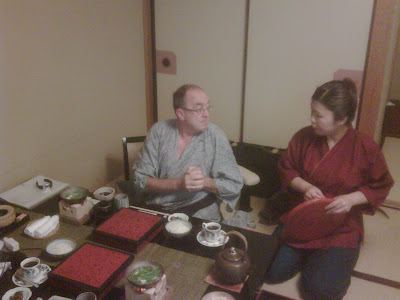 It is a memorable morning. We have been granted an audience with the Lay supreme Head of the Jodo Shinshu ( true pure land) Buddhists at their HQ and main temple in Kyoto. This very powerful and rich Buddhist sect was founded by Honen Shonin who was born and died in Kyoto, 1133-1212. He practised Buddhism on Mt Hiei and founded Jodo Shu in 1175. They are now busy preparing for the celebrations of the 800th anniversary of his death in Kyoto in 2012 and have a campaign to encourage" co-existence" with nature as part of these memorial celebrations.
The declaration states, "we vow to develop a new culture of co-existence in which there will be a compassion for the life connected from the past to the present and on into the future. "

I meet Socho ( which translates as top Chief) Yasui, the head of jodo shu and he explains how they see The Temple as at the heart of the community and so they support and encourage non profits as part of their work in the community. They are supporting the development of JACEVO. I talk about how ACEVO has also been supporting the Church of England's campaign to ensure churches are also full parts of their communities and the asset of the Church building is put to greater use. I tell them how I have been in discussion with the Bishop of London on this campaign. I explain that Socho's colleague , William Fittall , the General Secretary of the Church of England is a member of ACEVO. He is impressed! 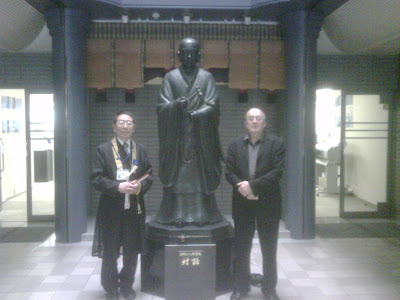 The photo demonstrates co-existence and shows Socho Yasui with Socho Bubb by the statue of honen Shonin.
It is interesting to reflect on these links and how they see their role as promoting community development. It is core to the task of many of our third sector organisations and, of course what we encourage through our loans in the Adventure Capital Fund.
We are then taken to the temple where Honen is buried. It is a remarkable and beautiful building set against the woods of the surrounding hills.
Then it's onto lunch with the Chancellor of one of Japan's top universities, Ritsumeikan; Professor Kifoyumi Kawaguchi. He has a particular interest in the third sector. He has researched co-operatives and when he has finished his stint as Chancellor will return to third sector development. He is keen to discuss the growing role of our sector and the university support of it in the UK. I reflect it is interesting that the growth of university study and research has not kept pace with the rapid expansion of our sector. Third sector studies, let alone third sector management courses , are still not regarded as the top of the academic tree!but there are signs this is changing with the interest that new graduates show in sector careers.

And now I blog from the Bullet train to Amati where we will stop off in this resort town to enjoy the famous Hot springs! Our Ryokan Inn is by a spring so tonight I shall be lazing in hot water and thinking of England.

Everything sounds great but there might be some omissions. Ask Bubb-san about dry fish in the morning. He was screaming for English breakfast and Starbuck's frappucino this morning. And for the decency of the audience I won't mention who ended up in the women session of the hotspring by mistake. Japan-UK relationship has taken a new course after this trip!
Pepe Ohdearie