The demilitarised zone (DMZ) that runs between north and South Korea, and which divides the country at the 38th parallel is a surreal place to visit. It is however firmly part of the tourist itinery and it is only when you get there you realise it is all pretty grim. 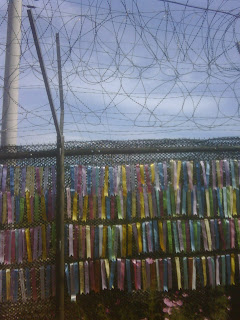 You get taken into one of the tunnels the North Koreans have built under the border. There are 4 they have found , but there may be more. You also go into the conference room where the peace talks are held- the table sits four square over the actual border so you are able to walk across the border, so to speak , and into the North. The soldiers all look rather fierce. And when you are there you realise it is all deadly serious. There have been various incidents over the years where soldiers, and one tourist , have been shot. And "Dear Leader" is becoming increasingly erratic. Last week they let open a dam and the surge of water into the South killed 8 people.
One interesting aspect of the DMZ is that there is a large stretch of land that has been untouched by human hand and has over the last 50 years become home to some endangered animals and flora who live a peaceful life away from rapacious mankind. What will happen to them when the eventual reunification takes place? 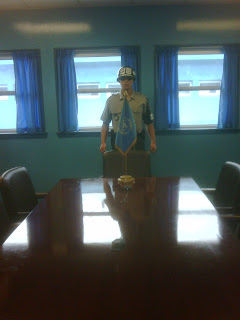 Anyway my trip is at an end. Tomorrow I fly back to Japan and then to dear Blighty where a sumptuous feast of bacon and egg awaits!I have finished my holiday reading, " Cherie Blair- speaking for myself". I have a hardback and I'm so overloaded I have donated it to the GuestHouse. Who next will read Cherie , I wonder?
I fly Virgin, which seems appropriate as one of my new ACEVO members is Jo Barnett, the new CEO of Virgin Giving. It has been set up as a non profit. I'm probably not the only one who thought Just Giving was also, but in fact its a for-profit. Last week Jo emailed me with the great news that Virgin Money Giving is now live to charities and will soon go live to the public .
She is proud of the new not-for-profit business, which I am confident has the potential to benefit all charities in the UK, both large and small. Virgin is now the official sponsor of the London Marathon from next year. Jo has a real energy and determination about her and I want to ensure we give her support as a new member. She will really put them on the map. Another dynamic CEO in the sector!
Virgin Money Giving hopes to make a real difference for the Third Sector – online giving is the most efficient way to donate and more of the money raised through Virgin Money Giving will reach charities than through other donation sites; so that is good news to ACEVO members generally.

Hard to credibly shout from the rooftops that VirginMoneyGiving is 'not-for-profit' when it very clearly promotes a for-profit setup, at the same time as decrying JustGiving for being 'profit-making' when it's very clearly changed the face of UK fundraising over the last ten years and, as far as I know, has yet to make any profits in those ten years for their 'investors' (who, it would appear, aren't out to promote themselves either by using JustGiving to promote their brands or names).

Much as I'm keen on the right organisational models to be attached to the sector, and pleased as I am that there's more competition in the online giving arena, sometimes the bleeding obvious also needs to be looked at when trying to make comparisons!
Or was there a seat discount going for the flight back?

janet,you let yourself down. made no comment on justgiving who I know do a good job . But they are a for profit company and the one virgin have set up is a charity and jo is a member so i have no problem in ginig her wholehearted support , And so no hares start runnig re your unecessarily snide remark , jACEVO very generously paid for the flights for me and for my Director , indeed they very generously covered all our espenses in japan too . It was kind of them and it is not pleasant their hodpita;ity is queried in this way.

Stephen,
You let yourself down to rise so vociferously and defensively to such an obvious line! Unless there's some underlying nervousness in this area???

By the way, VirginMoneyGiving a charity? Still think you may have some wires crossed there in your thinking...

They are not a registered charity.

If they do make money, it will go into improving their services or reducing their fees.

...good to see someone checking on Stephen's (inaccurate in this case) pronouncements for correcting where appropriate...

Suspect Lyndall's comments centre around the fact that the difference between a 'for-profit' and a 'not-for-profit' is generally not in the legality (unless VirginMoneyGiving were to have been established as a CIC for example - they're established as a 'normal' Limited company) but merely in their ongoing practises (i.e. they have none to point to to demonstrate their not-for-profit nature, yet).

This really concerns me as an ACEVO member. It feels (and has felt for a long time) that Stephen has stopped listening to members and has an agenda of his own. His thinking on Virgin Money was confused (Stephen thought they were a charity they're not). Janet F had every right to question his understanding and motives. It is also entirely fair and just to question ACEVO's hospitality. If the hospitality produces positive outcomes then it should be easy to justify. Stephen can't expect to write frequently and publicly about where he's been, without accepting that members have a right to make him accountable for the outcomes of his work and also ask him to justify the money spent.

Dr Adams, Have you forgotten one important fact in your comment? Jo Barnett is an ACEVO member. I support what she is doing and I see one of the purposes of my blog as to promote the work and efforts of members.

I think the attacks on the work that Jo is doing are unfortunate. She is setting up a new enterprise aiming to support the sector and good luck to her. I make no apology for promoting ACEVO members like Jo.

I should also apologise if I say that one of the things that infuriates me are attacks on my personal integrity. I am happy to be corrected on what I say or have a different view point advertised but I see no reason that I should tolerate snide and insulting comments about me personally. The original comment made on this was the suggestion that I had made these remarks in return for a cheap fare. This is not only untrue but grossly insulting of JACEVO who generously paid for my fare. It also implies that I conduct my work in a sleezy manner.

I love my role at ACEVO and undertake it because I believe I can make a difference- and have. I see no reason why I should tolerate personal attacks on my me or my integrity? Would you?

I enjoy blogging and believe this makes me accountable in a way no other sector leader is. I do my blogs late at night and often at odd times and I try to do it on a regular basis. They are a good way of promoting messages in, I hope, an amusing and ironic way. But when I read these sort of comments from you and Janet it does make me wonder. Would you tolerate such personal attacks in the course of your work, I wonder.

I suspect a little paranoia is setting in.

For someone who apparently likes to communicate in 'an amusing and ironic way' your descriptions of a comment about a seat discount as being 'snide', 'grossly insulting' and a 'personal attack' seem just a tad of an over-reaction. Or is this just to avoid engaging in some of the other comments around your blog more worthy of your consideration (including some, apparently, made by your members)?

Attacks on what Jo Barnett is doing? Hardly! The accuracy and objectiveness of your comments was what was brought into question.

Finally, in another blog response you write how much you enjoy Bogg's Blub - given your response to a few minor comments here, I guess we must assume that this is said through gritted teeth?

I enjoy your blogg and yes its a great way of communicating.

I was though genuinely concerned about your response to Janet F's comments. Firstly you do not have the right to tell people they have let themselves down. Secondly it looked most unprofessional to write a blog at 2-00 am in the morning using words such as 'espenses' hodpita;ity' and calling someone who had given legitimate feedback snide. You had your facts about Virgin Money Giving being a charity completely wrong.

No one is attacking Jo Barnett, in fact I wish her every success. I think though as professionals in the voluntary sector we have a right to ask balanced questions. And you have a responsibility to respond in a professional and dignified manner.