Conference and the Third Sector...

No sooner had I left the Mandelson speech than within 15 minutes I had met with 5 ACEVO members! We soon had a gaggle of charity CEOS; Simon Gillespie (MS), Cliff Prior (Unltd), Lynne Berry (WRVS ), Mark Lever (National Autistic Society) and David Harker (Citizens Advice). There are other ACEVO members here and I see more as I move around the Conference. And to show willing I go to some of the stands. As you see here I was on the MS stand- an excellent demonstration of how an someone with MS experiences the world. 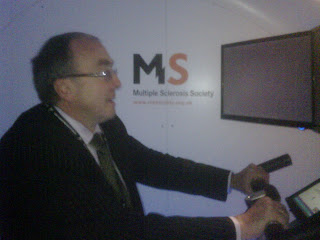 The evening is a whirlwind of lobbying. I'm particularly pushing the need for a Community Reinvestment Act. I think it is excellent that the government have finally got to grips with the need to control the behaviour of Banks I'm arguing that a CRA should be part of such legislation. Part of the payback for the banks bail- out. And as crucial is the desperate need for action to establish a Social investment Bank.

Today was a good lunch time fringe led by the Charity Commission " community, cooperation and compromise" as it was rebranded at the meeting. Jill Pitkeathley argued for the need for greater political sophistication in the sector. She argued that there are opportunities in the current climate and third sector organisations need to co-operate and indeed " compromise" to achieve aims. My Chair spoke about how a new model of alliance has worked in the sight loss world and that whilst there is no argument for a monopoly and there is a case for a diversity of organisations but having over 700 sight loss charities is too many. Nick Partridge of the great and pioneering charity , Terence Higgins also spoke of the value of mergers! But also the challenges of the process! The charity commission publish advice in both collaboration and mergers. Click here to read.

I got a chance to talk to Mandelson last night about his speech- of course I did know him at Oxford and he has done somewhat well since then! But I was particularly flattered when speaking to Jack straw MP to be told that he had been particularly struck by the book ACEVO had published back in 2003, which we called provocatively " Replacing the state"and how those ideas had led directly to the new contracting process for prisons and the contracts for prisons where third sector organisations are working with commercial organisations. It is a vivid demonstration of the value of lobbying and thought leadership. I was touched and heartened by this - a good example of the power of advocacy on behalf of our sector's Chief Executives.
I did the receptions for both the Telegraph and the Guardian and it was great to catch up with Ed Miliband who I really do see as a future Labour leader. He has both charm, intelligence and a strategic vision. And he was our very first Third Sector Minister!
Jon snow finished the Charity Commission fringe by using the comment I had made about " a recession being too good an opportunity to miss". So with that last comment I rushed to the conference to listen to Gordon Brown make what may be his last speech as PM or the speech before he wins an election! I was expecting more of a reference to our sector though he spoke of his work in a hospice and the need for support for volunteering. I also appreciated his promise to enshrine in law our commitment to pay 0.7% in international development. Our NGO member CEOs will be pleased with that. Many of our health members will be also pleased at the announcement of a "National Care Service" and more support to keep people in their homes rather than hospital or institutions. 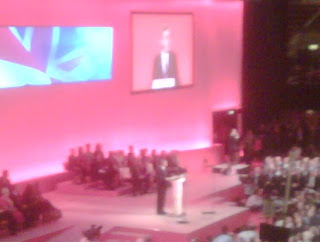 We shall see how the Conservatives respond in Manchester!