We have 2 fringe meetings at the Labour conference. Last night a session with Demos on personalisation. ACEVO has a Commission on how to personalise public services so we had a rather excellent line up of speakers, including from Sweden. The fringe was ably chaired by the 3 brains Matthew Pike. 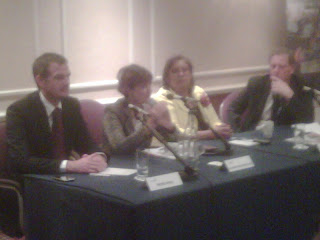 And then today a joint meeting with the trade union Community. Their General Secretary is an ACEVO member. Last week it was announced that we and Community had won a joint bid from the government's modernisation fund to run a project together to promote community cohesion.
My deputy Peter Kyle gave a very effective speech and talked about how ACEVO will work at local level to support and promote communities.
Tessa Jowell MP made an impressive speech and argued that the unions ought to be developing a much stronger relationship with the rest of the third sector. As things get much tougher then there is much we can do better. So the 2 year project we are running with Community to help develop better links at community level between trade unionists and local voluntary sector organisations is crucial. It could be a model for other such working arrangements around the country.
It is sometimes said ACEVO is only about large charities. This has never been true and we have strong membership in smaller and community based third sector bodies. This project is not about philosophising on small v large but getting things done. I like to think it's the trademark of the organisation I led. No whinging. Just get it sorted. Its what CEOs do. Trade unions have strong local branches. Many people are active locally and we should connect them to trustee vacancies or volunteering and to promote the areas where we have a joint agenda- better public services for example.
And our ACEVO Chair Lesley-Anne Alexander talked about the value of cooperation and collaboration - she has led that approach at RNIB and was keen to see this new joint venture succeed as a role model in the third sector as well as trade union movement. It is important that we have these events and ensure that our political leaders (in all parties) remember the role and importance of the third sector in moving our economy forward and securing social justice. I went into the conference session to listen to Peter Mandelson. Masterful! Engaging. It really was a good speech and well worth being there for it! 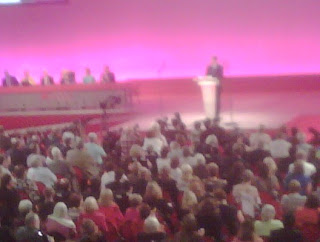 And now for the evening of receptions and networking.. Bubb will be pushing the third sector at every available opportunity.