The Tokyo Launch of JACEVO! 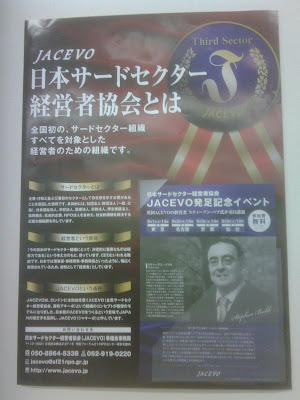 The adrenalin rush before my 80 minute speech helped subdue the jet lag and I was soon greatly enjoying myself! The launch event was a big deal: representatives of Government and a key note speech from one of the country's top economists, Director of the University and President of Japan's largest non profit. It meant the profile of the Launch was high and I was on my mettle. 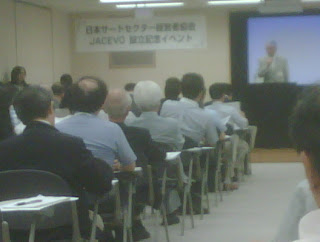 It was incredible to think that not only have the Japanese sector decided to set up an ACEVO type organisation they have flattered us by actually calling it JACEVO and not using a Japanese name. Imitation is, after all, the sincerest form of flattery and we are certainly flattered! I spent time on the presentation with my Director Filippo (it will soon be on ACEVO's website!). I talk through the range of services we offer our CEOs, the support mechanisms and wide range of events (we lay on an event every four days!). I talk about our mission to deliver a modern enterprising third sector led by strong professional leaders.

I then talk about how we work strongly with Government to push CEO interests and our great achievements; FCR, long term contacts, public service delivery and commissioning reforms and the OTS. But I stress that one of our most important roles has been to raise the standing and profile of our sector and its leaders nationally. My message to the mass audience here for the launch, is that JACEVO should have a similar huge ambition.

They are particularly interested in how we might deal with a change in Government in the UK. Since their own massive election change they want tips! I tell them that as well as contact at all levels in government- civil service and ministers we have also had strong links with the Conservatives at political and policy making level. They rather like my many photos on the presentation; shamelessly I show me and Tony Blair at No: 10 , with Gordon Brown and a cute picture of David Cameron with a small puppy. Oh yes, I say, we love dogs.

I make a personal link in my talk with my own interest in Japan. I was born and brought up in Gillingham, Kent and every day on the way to Grammar School I would pass a memorial to Will Adams who is regarded as the founder of the Japanese Navy. He left Gillingham in the late 1500s and was employed by the great Tokagaru Shogun to build western style ships. He died in Japan. So he was working in Japan at the time of the great codification of our charity laws under Queen Elizabeth I.

After the launch we board the bullet train for Nagoya, Japan's third largest city and home of Toyota for Launch No 2. We arrive in time for another pleasant dinner, this time with the charismatic and popular Mayor of Nagoya , Takashi Kawamura. He was previously a member of the Diet for the Democratic party and attempted to stand for PM. He has a strong populist streak and since election as mayor he has slashed the salaries and pensions of the local councillors and is attempting to move to parish style government in this city of some 2 million. He has written a number of fun books such as "The country is in ruins, though Diet members remain" and "Hey Kawamura! When ya gonna be Prime Minister? – The Rebellious Samurai Takes on 10 Opponents Back to Back for Social Reform"! He has a strong commitment to a bigger role for the third sector and is helping support the growth of JACEVO.

Dinner is again served with us sitting on the floor. My back rather rebels at this but fortunately the Sake helps kill the discomfort and removes the embarrassment of me walking into the restaurant having forgotten to remove my shoes. Oh horror! 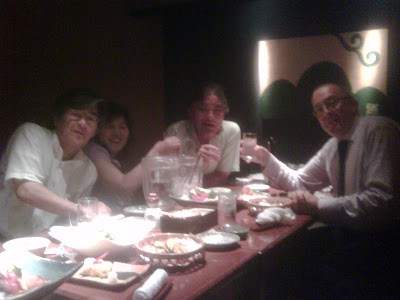 At a restaurant with the Mayor of Nagoya