The weather forecast for our Annual Conference proved rather prophetic, "widespread gales; severe in places". As I said to delegates, somewhat of a metaphor for our sector at the moment! But my key message, which I think our CEO membership very much supported was one of optimism.

Our Annual Dinner was certainly along that theme. We had Rory Sutherland, the Head of Ogilivy and Mather in the UK, speaking. A masterpiece in public speaking with some fascinating insights. I liked his point about why we were spending vast sums on a high speed rail link when actually, rather than trying to save half an hour of the journey time, the money would be better spent on nicer trains where you can find a seat, get wi-fi, attractive staff, gourmet food and arrive on time. An example of an engineers' solution triumphing over what consumers actually want.

Sam Younger, the new CEO of the Charity Commission, also spoke. Sam is proving to be an excellent new broom. He is clear that the huge cut to their budget means a fundamental change to how they operate. I had a good discussion over dinner about this - for example on how they treat charities who want to pay Trustees or change the Board to a more corporate model. It's time for a more enabling approach; trusting Boards to know what is best for them. After all if a charity believes it needs to pay Trustees then why should they be prevented? We will see change here. Bring it on!

Wednesday saw an interesting meeting. Nat Wei called a Roundtable between ACEVO and the CBI to talk about how business can contribute to "Big Society". A number of the contributions, including mine, stressed the importance of a major shift of balance in provision of public services to a big role for independent providers. As I said in my speech to members, when you look at proportions of delivery; in public health only 7% is accounted for by the third sector, 5% in rehab services.

Nat was on good form. I detect he is growing in the job and understanding better the role the organised third sector can play.

I left the Cabinet Office to be confronted by a demo. What, I quipped, protests about ACEVO cuddling up to big business! But no, it was revolting students.

I needed to get across the road and through them to get to a lunch. Ironically a lunch at the Liberal Club with Nick Clegg MP! I resisted the temptation to mention where I was going as I made my way through the rather pleasant and accommodating crowd! 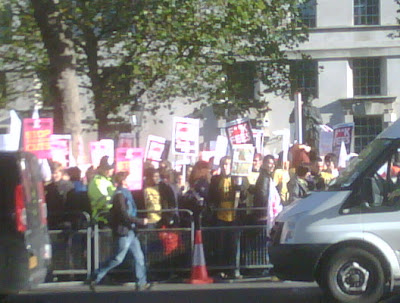 The event was a lunch for the Lib-Dem Anglo-Israeli Association and Nick was speaking. He came over for a word - remarkably remembering our chat over lunch at an ACEVO event in Sheffield a year ago!

Nick Clegg and my left shoulder... 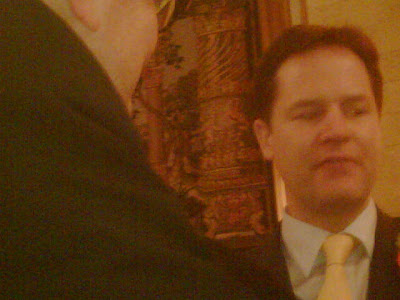 Good to discover that the new Head of the Office of Civil Society, Gareth Davies, is an old member of my Oxford College (Christ Church). Gareth came to our Annual Conference Dinner; where my Deputy, the estimable Dr Kyle, gave him a brief tour de horizon of our great sector! And then I saw him again at Christ Church in Oxford last night as we were both speaking at a College careers event.

It was great to be back at College and I even managed to get there in time for College Eucharist in our marvellous College Chapel - see below! 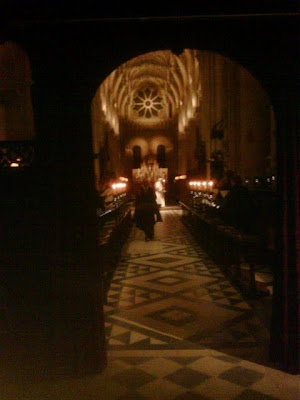 Had a very energetic discussion with Gareth over dinner. I approve. Clearly a Civil Service high flyer and with the skill and brain to really push our cause across Whitehall.

This is a man we can do business with!