Well, I made the launch of our two new Commission reports last night! Somewhat bleary and jet lagged but at least we had drinks laid on to dull the pain! I blogged on the Lambeth Commission report yesterday so today let me update you on the other Commission.

I wonder if the recent speech by David Cameron on a "people power revolution" is set to fail unless the practical underpinnings are put in place? This was a key issue that was raised by the report of the National Commission on Personalisation, Chaired by three brains Matthew Pike.

The Commission on Personalisation report, entitled, "A People Power Revolution: Making it real" To read both the National Commission and the Lambeth Commission Reports click here.

The National Commission’s final report was released yesterday. It warns that whilst personalisation presents the biggest opportunity in decades for a revolution of our public services, unless charities and local authorities work together and Government puts the necessary underpinnings in place, personalisation and ultimately plans for a “people power revolution” will fail.

The Commission’s report argues that personalisation and devolving power over public services could bring more tailored and responsive services which would not only result in better outcomes for service users but also greater efficiency for taxpayers.

It is also, at the most basic, the best way to deliver services; by putting people in charge of the service the receive.

However the Commission argues that we have reached a fork in the road and that a devolution of power within the welfare state will remain rhetoric without a boom in civil society and unless Government sees the promotion of civil society as fundamental to the success of its ‘people power revolution’.

The Commission makes a series of recommendations that embody a new mutualist approach to public services:

- Encouraging providers to band together

Speaking last night at the launch of the report, Matthew Pike made the point that "Ahead lies either merely a devolution of theoretical rights with a lack of practical underpinning which would result in wasted resources and worse outcomes for service users, or an ambitious revolution of rights accompanied by new structures which makes individuals lives better!". That's Matthew for you.

Nick Hurd MP came for the launch and made a strong plea for the sector to take up the opportunities that a radical approach to public service reform will bring. He said the forthcoming White Paper, setting out how the Government will approach reform offers a chance for major growth and, in answer to a question about ACEVO's prediction that this could be as much as a £2 billion boost to the sector suggested it might even be more over the long term.

It's a theme I shall be reflecting on at our National conference tomorrow. 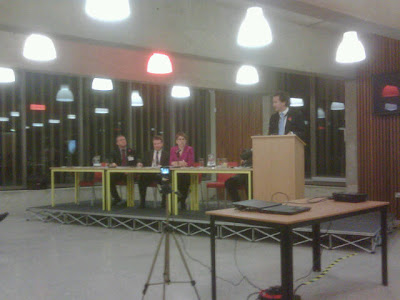 Did anyone attend the Coin Street launch?? Looks like Nick Hurd is talking to 3 people sat behind a desk, a laptop and an extension lead.