I get off the train in York to see a screaming banner poster by the station newsagents announcing "York Charity Cuts". I go to my meeting of ACEVO members and discover the awful truth. The local PCT have decided to make in year cuts of 30% to the voluntary sector. Never mind the Compact. Never mind exercising common seems. Slash the sector!

The local paper says a York charity which faces losing thousands of pounds in funding from a cash-strapped NHS have branded the cuts “ridiculous”. NHS North Yorkshire and York has suspended a string of contracts for organisations in the voluntary sector after revealing its 2010/11 budget is currently overspent by £17.9 million and the cash gap will rise unless it acts immediately. This means York Council for Voluntary Service, which provides back-up to about 1,000 community groups around the city and volunteering opportunities for people with mental health problems and learning difficulties, being left with a £17,500 shortfall in four weeks time.

The meeting with members was rather sombre. In the meetings we had for members at the beginning of the year I always asked whether people felt optimistic or pessimistic. Overwhelmingly people used to be optimistic. The picture has changed. It was much more mixed today. Members were concerned at how the cuts will affect them. And how the cuts will affect the people they work with. There was concern at how Councils and Health Authorities will behave and whether they will be like the York health lot.

But there was also optimism that in the longer term there are opportunities for the sector to grow. I was encouraging members to push their case on the public sector for how we can deliver better services. Be proactive. Make the case for how we cam deliver in the face of spending cuts.

I was due back in London for a dinner but it was cancelled so I had a couple of happy hours in York. A visit to one of the country's best tea shops, Bettys, where I stocked up on good tea (leaves obviously) and coffee beans and a Yorkshire tea cake! See the tea counter here. 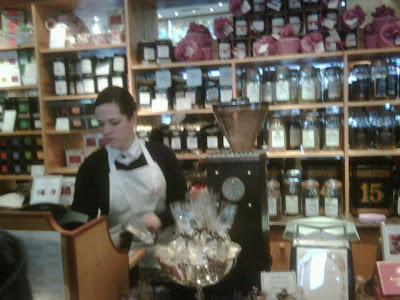 And then off to the Minster. See how glorious it is in the autumn colours! 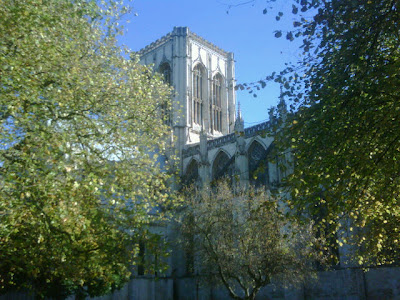 My Deputy has been developing Bubb like tendencies. He is currently at Windsor Castle! One of our members, the Windsor Leadership Trust and their leadership course. And last week he was making a presentation for the Duchess of Cornwall at the French Ambassador's residence! He sends me a photo of St George's Chapel!