Well, our fringe event with Ippr North went a storm. In fact it was entitled , " A perfect storm for the North of England? Localism, Cuts and the Big Society".

We had a range of speakers but the star was undoubtedly Lord Nat Wei. Although I've met him quite a few times now I have not heard him speak before and he is fascinating. A very compelling speech and an excellent outline of what he sees as the big picture vision for a Big Society. And an interesting outline of the role of " groups". I have worried that the vision of BS is too individualistic and ignores the role of collective action and community cohesion.

He agreed with my point that we cannot simply unleash an army of volunteers onto charities as they do have to be managed. But he suggested that part of the deal might be that corporates should think about using their managerial skills to support this. A good point that I was making to people from Starbucks recently- corporates too often let their staff volunteer , say on painting the youth club, when in fact what is needed is logistical, financial and planning skills to support!

Overall, an intriguing and captivating performance. It was a remarkable change from the usual political speeches you get served up at Party conferences, indeed it had a strong intellectual core!

I suspect though there is much work to do in translating the vision into practicality. We need the mystics, but we need the boring practioneers too and the BigSoc crowd conspicuously lack these around them. It all boils down to connecting the romanticism with the reality of day to day government. As yet the government has not managed to connect in the massive presence and experience of the third sector. I still get that strange " year zero " feeling about the Big society project. It's not a brave new world. In fact it's a very old one; as my recent lecture showed!

The vision will only be realised when the third sector is fully involved and behind the project. So far members get the distinct feeling they are regarded as somewhat marginal in all this. Until the project gets to grip with this salient fact they will fail. And that is not in our interest.


And talking of my lecture, I've now got copies printed and I hand them out to people like an old time preacher flogging gospel tracts. I bumped into the Editor of the Times and gave him one. He said " great, I shall postpone my dinner and read it". But perhaps he was joking?

Fringe over, the ACEVO team hastened to the Respublica marquee for the end of one of their fringes. I managed to catch David Freud ( now Lord Freud) for a long chat on welfare reform. I congratulated him on winning the battle with Treasury. I think Freud has done a magnificent job here, started when Blair appointed him until he was thwarted.

I also had a good discussion with Rory Stewart MP , who avid blog readers will recall I met recently. He is a rising star of the backbenches and was talking about the BS project in Eden in his constituency.

Respublica are certainly making a splash here! The omnipresent Philip Blond is speaking at what I reckon is 30 events! I am speaking at one of them tomorrow! And the highlight last night was their " Big society party"packed to the gunnels( if that is correct of a marquee? ) With third sector folk and politicos. Great fun. 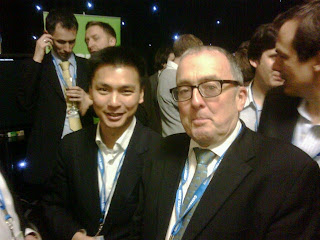 So a somewhat late start to the day....