It was Thursday so it must be Wales! I was speaking at the annual meeting of the Vale of Glamorgan CVS. The Executive Director, Rachel Connor, is an ACEVO member and the Partnership and Development Manager, Clive Curtis, is an active Euclid member. One of the special things about ACEVO is we have members across the UK - in Wales, northern Ireland and Scotland. So we are unlike many of the other umbrellas who are confined to England!

It was a great conference. Filippo spoke about the work of Euclid in bringing together third sector leaders across Europe and I talked about the role of leaders facing a difficult climate of cuts.

I gave them top two tips if facing a funding crisis. Don't whinge and moan publicly. This does not encourage people to support you. You have to get out there and seek new opportunities. 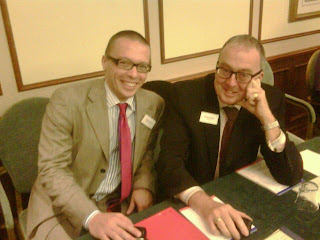 And so networking becomes more important, not less. This is the time when networks of leaders like ACEVO becomes more crucial.

I also said it was crucial for our sector to look at mergers and partnerships, and sharing services and back office support. I suspect we will be seeing much more merger activity over this year. If grants are squeezed it makes sense to look to other organisations to work with.

We are publishing a new guide to handling mergers and partnerships at our Annual Conference on 11 November. We are also forming a Merger Panel of CEO members who can help other CEOs who are about to embark on the process. If you think you can help do contact me.

A great day. Incredibly friendly audience who seemed in good spirit. I asked them if they felt optimistic and the majority were, though a quite large number who were pessimistic (which I guess is hardly surprising!).

A good mix of leaders from organised third sector bodies as well as leaders of entirely voluntary organisations. The good thing about CVSs is that they bring together the full time run and the wholly volunteer side of our sector. But as I said many of the messages are the same.

And after the conference ended a treat. Clive took myself and Filippo out to see Castell Coch, a marvellous fairy tale castle built for the 3rd Marquis of Bute by that wonderful Victorian architect William Burgess in the wooded hills above Cardiff.