Well, it turned out to be the Hot Ticket of the conference. We were packed out. People sitting on the floor ( in breach of fire regs I suspect but Lord Young would so approve), standing outside the doors ; all there to hear the ACEVO- Policy Exchange fringe.

It was back to " Big Society or Big State " with a range of good speakers, and even me! Nick Hurd MP had stood us up! He had gone back to London to do media, but as someone said to me , "well Stephen if it is a choice between speaking to 5 million people on the One Show or a packed room in Brum with you I know what I would choose!" But we got Nat Wei instead so I was not unhappy. 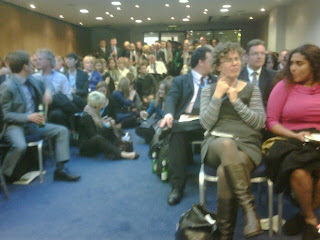 It was good to see Nat again , but he had to suffer a rather trenchant lampooning of the Bigsoc idea by Clare Fox of the Institute of Ideas.

But Nat made a rather pertinent point that at least the concept of Big Society had got people talking. It's the most popular theme of the fringes around here. He said if they had called it building capacity in civil society it would have bombed in a few weeks. He is right! And this is an important point. This debate has certainly focused attention on our sector; what we can do and what we might achieve. So let's not knock that.

I have always been irritated by the " tescoisation" jibes from those who don't uderstand our sector. But I see we now have a supermarket war of our very own, with the news that ASDA ( yes, the American supermarket chain owned by Walmart ! ) is to sponsor the Big Society Network. So I guess we will now be hearing about the Asdisation of the sector.

Up early to go to a breakfast on the Big Society. Bob Neill MP, one of the Ministers at DCLG, said it was about giving power back to communities. And certainly this must be a core conceptual component of BigSoc. I made the point, again; that communities are of interest as well as place. So much of the great work of many national charities is about protecting and promoting the communities of say , the visually impaired or people with disabilities. And let's remember that communities of place are not always a welcoming or progressive place for people with mental health problems! 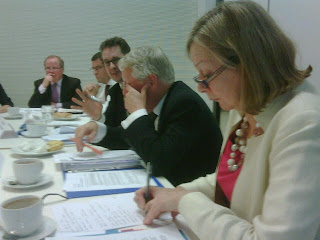 Bob did say that this issue is something they had been working on and he and Eric would welcome a further discussion on how we tackle this. It's a real issue and I need to get more input from members on how to develop a framework that protects and hears all communities.

The Localism Bill is planned for 3rd week of November so time is short.

Bob says it's all about "giving power back to the communities". Interesting... An acknowledgement that communities have no power? And when was it taken away? By whom? All this "empowering the community" talk is great rhetoric, but the "Big Society" is one of those amorphous ideas that means all things to all people.