Health; and health of sector!

Whilst I'm having a great time on holiday it's a bore I'm missing two important events back home.

First, we have the launch of the Health White Paper today; a key document setting a road map for health reforms and marks out a strong , expanded role for the sector. My Deputy, the estimable Dr Kyle, has been in confidential discussion yesterday with Ministers and will be given a preview of the contents before launch tomorrow at what they charmingly call a "lock down"! Its a good sign of how they want the sector's Leaders involved and how important they think our role must be.

And how good to see the back of "preferred provider"; a grave error of judgment by Andy Burnham. I'm not sure that Labour has yet fully understood the enormity of their failure to get to grips with public service reform since Blair left. The current. Leadership contenders seem to be tied into the failures of the past. So no good knocking "Big Society" if you don't have a reasonable alternative. Time for Ed to spell this out properly....

It is interesting that the Secretary of State will demonstrate a commitment to a bigger role for the third sector by making his first public speech on it at our ACEVO Health and Social Care Conference on Wednesday. This event, which ACEVO has been holding for its substantial health CEO membership, has become a firm "must attend" conference for all in the health industry. And we are looking forward to hearing Lansley. He was particularly good when he came to our ACEVO Tory summit earlier in the year. He clearly "gets" the role of the sector and our policy team have been working closely with the Department on how to expand the role we can play; in personalisation and in health promotion and prevention of ill health.

Too much of our health budget goes into acute care, when money spent now on prevention pays dividends down the line.

And what of the health of our sector? As I have been warning in this Blog , the rise in VAT is a serious blow, coming at a time of cuts, pressure on giving and rising demand for what we do.


There will be a vote in the Commons on Tuesday on a clause exempting charities from the 20% rise. We are working hard, with colleagues, to get MPs from all Parties to vote for the amendment. Our policy team are flat out on the health White Paper and on the VAT campaign. How brilliant it is for our sector that ACEVO has such a talented and resourceful staff.

The Charity Tax Group estimate the cost at £143m. It further widens the gap we face in competing with the public sector in tenders ( they are exempt) so fair is fair. If you want a big society then vote for it.

Smaller charities will be hit hardest.

Now to our very own Charity Commission? I am flattered they read my Blog , but they clearly don't get the new media, as they seem to think that Bubb's Blog is like Holy Writ (um , come to think of it... ). I get the press report of comments from them on a particular Blog penned whilst I'm on holiday. Clearly they can't be bothered with the niceties of actually alerting ACEVO before they issue a press release. But I must not complain. Why, it just shows how important it is to keep up with the Blog. What horrors yet to be revealed? But all this draws traffic to what I'm told is the most widely read Blog of the sector, so I look forward to many more Charity Commission investigations. Whether that is a great use of their scarce resources is another matter.


The tour of Anatolia continues. Saturday I was at the site of the Martyrdom of St Philip the Apostle. An ancient, now ruined Basilica marks the spot, just outside the old Roman City of Heiropolis. I walked the ancient Byzantine stone paths up the hillside in the blazing noonday sun, but was rewarded by having the entire site to myself (and the odd lizard) ! I retrieved a small stone from the ground to bring back for our very own ACEVO Philip, the mighty Filippo Addarii, Director of the fast growing European leaders network, Euclid. This is not to suggest that Martyrdom awaits failure in work at ACEVO obviously!

But every good third sector leader needs rest and yesterday was one of pure indulgence and laziness. On the beech with Orhan Pamuk (the book that is). Have finished his masterful memoir of Istanbul and onto the thriller set in the glories of the 15th century Ottoman Empire and the Sultan's merry band of miniaturists. A must read, "My name is Red".

And some more holiday snaps. I realise you are all having your very own heatwave! I'm worried about the survival of my vegetables! It's a matter of public benefit you know!

Site of the Martyrdom of St Philip the Apostle. 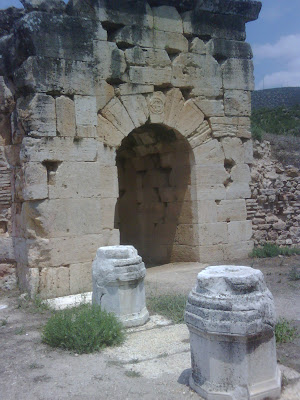 Wow superb scenery !! Really it is a very beautiful place and i like to visit here again. Really your photo collection is amazing. Good work !

"How brilliant it is for our sector that ACEVO has such a talented and resourceful staff."

Clearly not that talented: http://www.thirdsector.co.uk/News/DailyBulletin/1016052/Measure-shield-charities-VAT-rise-defeated-Commons/1E96523755DF69195EC869AD6F91197D/?DCMP=EMC-DailyBulletin

A beautiful page. I liked.

I would love to have the same adventures as you had here. Great photos. Thanks a lot for sharing.

I would recommend this site for a breast reduction surgery.