There has been much debate about whether the current financial crisis offers a chance for more radical approaches to delivery. ACEVO has encouraged this. Clegg has talked about "progressive cuts" .

As yet little evidence of the ideas moving from soundbite to reality. Indeed there appear to be some Ministers who seem to want to demonstrate their machismo by glorying in the blood and gore of deep cuts. So, people will suffer! Yes - all necessary to show how we are tackling the deficit. But it is always someone else who suffers the pain. And there is no evidence that the cuts announced are anything other than mainly regressive.

The sector's CEOs have offered to help shape a more progressive approach. Time this offer was taken up.

And this particularly applies to local Councils. There are disturbing signs that Councils are rejecting the chance to look radically at how they deliver and instead taking the axe to what they see as the easier options. Appalling news from Croydon Council illustrates this. Hammersmith too. And others that have yet to hit the headlines.

A recent story in Third Sector;

"Croydon Council is set to cut £1.2m a year of funding from the voluntary sector. The south London local authority is proposing to cut grants to local voluntary organisations from £1.8m a year to £625,000 a year over the next four years, a drop of almost 66 per cent."

But never fear, ACEVO will carry on making the case for alternative approaches. This is no time for a return to the massacres of the 80s. So the challenge for our sector's leaders is not to wait to be asked but to hammer on the Ministerial doors with examples of what we can do. Relentless banging of the drum that there is a different way.

For example the potential for greater social enterprise by the third sector is never more needed. More charities are looking to expand their role; like the great Catch 22 and Turning Point who have just won the contract to run Belmarsh Prison. Let's see more of this.

Many ACEVO members are already showing their leadership by exploring innovative ways to deliver. I will highlight one of my members and his example, though there are 2000 others!

Rodney Hill is an active ACEVO member in the North West. He runs Wigan Leisure and Culture Trust - turnover of over £37 million and 900 staff. The Charity also has a trading arm so very much a "social enterprise".

They have also developed their own umbrella org called SPORTA - the representative body for social enterprises within sports and leisure.

WLCT was formed in 2003 as a charitable trust working on behalf of Wigan Council to manage and support Leisure and Cultural facilities, initiatives and events for over 300,000 residents across Wigan.

It is sustained by a combination of external funding and income generation, including an annual grant from Wigan Council. The Trust is a registered charity and a social enterprise, which means that any surplus income generated must be invested in improving facilities and services for the people of the Borough.

A trading arm exists for services that are deemed not to be charitable. These are largely the catering services and grounds maintenance.

It is exactly this sort of approach that more local Councils should be adopting. Instead of looking to just cut regardless, new approaches like this offer a better approach. Croydon burghers take note. There is a different way of doing things!!

Already Lambeth Council are looking at developing more cooperative approaches and have established a wide ranging Commission to explore a radical approach. More should follow, instead of disgusting attempts to offload the pain onto the very organisations at the front line of supporting and protecting the most vulnerable and marginalised. Do I recall someone saying "We will protect the front line"?

And I have a suggestion! I have been luxuriating in the glories of the Turkish Hamam. There is a 700 year old one here in Alyana. I relaxed there yesterday; the deep peeling and massage... there are few remedies better for dissolving the stress and worry of a CEO 's life. I think all ACEVO CEO's should be taking this cure. Perhaps I will offer it as an ACEVO membership benefit! It beats asprin! Or a shrink. And clearly has great public benefit (he adds in case those avid readers of my Blog at The Charity Commission have the vapours again, "CC to investigate ACEVO hamam offer", shock horror !)

And here's an idea. With the coming of personalisation we will all be able (us oldies that is) to use our care budgets for such treatments. After all a visit to a hamam would often beat an hour of a home help any day!

I think the personalisation agenda is just one of those approaches that could offer a way to be both cost effective and provide a better service.

That is why ACEVO's Commission under the three brain Matthew Pike is to report on this issue in November. So Rodney. There is an opening for you. Will hamams catch on in Wigan? 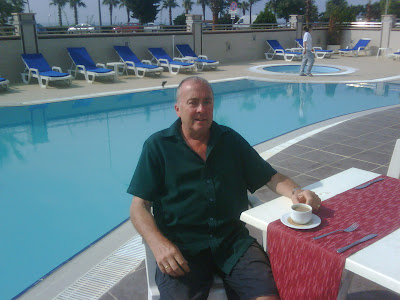