Have been paying respects to the Early Church! The cave dwelling of the hermit, St Simon, and the cave monastery of St Basil, one of the Fathers of the Church and much revered by the Orthodox.
Have been travelling in Cappadocia, Central Anatolia. It's a weird and wonderful landscape, most unlike any I have visited. It's the result of millennia of erosion after a massive volcanic eruption and the subsequent larva flows. It has left the countryside littered with what they delightfully describe as "fairy chimneys". These turned out to be great places for caves and were thus homes from the most early civilisations.
It became a major centre of the Church from about 300 AD to the Ottomans. St Basil, Bishop of Caesarea, built a great cave monastery, though I rather liked the remote cave dwelling of St Simon the Hermit. In the absence of air conditioning St Simon would have found this a cool place to contemplate. And no doubt he occasionally found solace from wine they produced from an early age; though I'm afraid the Cappadocian whites will not take on. And there is a perilous lack of tonic water (though lemons in plentiful supply ) so my two bottles of gin are dismally under abused. 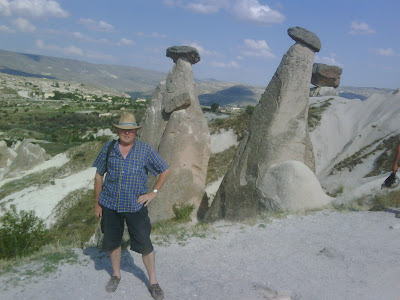 Observe the shapely Third Sector leader's legs, and hat, which denotes an Englishman abroad (white legs do that too...) 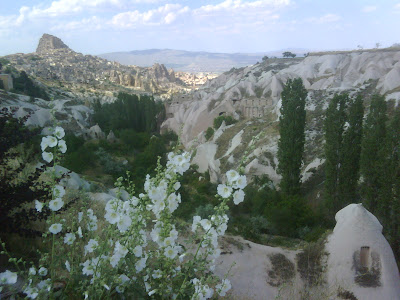 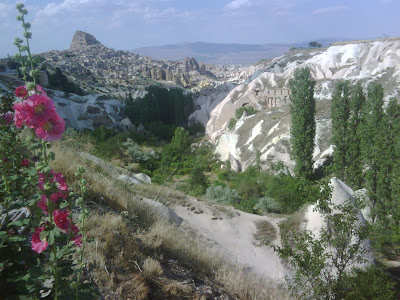 Pigeon valley, note caves.
Turkey has an interesting charitable sector. In many ways it comes from the same routes as our own - in religion.

For example, my favourite Mosque in Istanbul, the magnificent Sulmanye, built by one of the world's greatest architects, Sinan, has substantial surrounding buildings which once housed schools, a hospital and soup kitchens to support the poor. Not unlike the foundation of many of our own great schools and hospitals as endowed and run by the Church. Islamic Big Society I guess !

Both Christianity and Islam are clear on the duty of charitable giving. Indeed there are two interesting parallel injunctions in the Koran and the Bible which tell you to give alms to the poor. As the Bible puts it, you may be "entertaining angels unawares".
So many of the mosques are, among others, responsible for supporting substantial foundations. And some have developed in interesting ways. For example, the large Sabanci Foundation, which is an interesting case of a 'traditional' Turkish Foundation evolving into new spheres of social justice.
But back to our own charity sector. Andrew Hind has been talking of the need for a more strategic approach from The Charity Commission. It's high time frankly. Our recent Report (under the brilliant Chairmanship of Rupert Evenett) makes an unanswerable case for a Commission that is enabling, not one that is there to say no.
One example; the issue of 'Serious Incident Reporting' to the Charity Commission has been high on the agenda of many ACEVO members.
CEOs feel they have not been properly consulted and that the requirement and accompanying guidance to trustees is clumsy, and causes duplication with their reporting requirements to other statutory agencies.
ACEVO has raised a number of issues around this with The Charity Commission, and we were pleased to see some of these tackled in the updated guidance. However there is still work to be done in this area, please send any feedback you might have, as well as experiences, to andrew.fellowes@acevo.org.uk.
We need to keep Andrew, and Sam , on their toes...
Posted by Sir Stephen Bubb at 10:05