Something slightly odd to be eating dinner when my ACEVO staff have not even had their lunch! Allison and I were being entertained by the British Council at the exotic seafood Republic, where one's dinner arrives claw clad and with various instruments of torture to crack and unpick the food. You even get a bib (as modeled below) 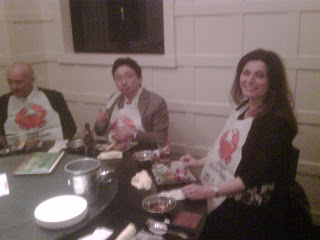 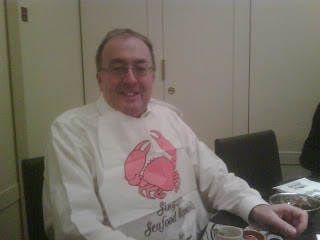 I have to say this sort of thing makes one think that vegetarianism has its place. And as I am feeling distinctly odd with jet lag and funny tummy I make a polite attempt at a crab claw and then give up. Still , the G+T was pleasant ( and medicinal).

I had spent the day talking " Full cost Recovery ". Indeed one and a half hours worth. And there were detailed questions from the JACEVO audience. I had to pause every few minutes for my pearls of wisdom to be translated into Japanese, but it always seems to take so much longer for her to translate than I had spoken in English and I began to wonder if she was adding her own commentary ; as in " well this englishman says he has done this but I reckon it's all a joke ". But I was assured that the Japanese translation is simply a lot longer and more elaborate.

It is clear that the issue of recovery of costs in contracts and grants is a very live issue here. It is being debated with Government and funders and they were keen to explore the ACEVO FCR business model. Indeed we even had an accountancy professor from one of the major Tokyo Universities who ran thorough the ACEVO FCR template. We are talking to JACEVO about having the system translated for them to use. How cool is that! And as I speak there is an active twitterer at the back busy sending on my comments to a young social venture partners network.

At dinner we had an interesting guest who will open the Council conference tomorrow;Prof Kaneko Ikuyo who heads the research Institute at Keio University but more interestingly is a friend of the current Prime Miniter form the days when they studied at Stanford together. The new PM is very interested in the third sector and how to use it to create social enterprises and deliver more public services. Prof Ikuyo holds a bi monthly " public forum " for the PM when he brings together people from the sector and others to talk about issues that affect people and government. It is clear that they see the UK model as very applicable to their own development. I shall talk tomorrow about how ACEVO has helped develop the strong relationship that we have with government in the UK and how our economic , as well as social power has forced more attention to be paid to what we can achieve. So although the sector here is small , it is growing. It is a lesson that many countries are discovering and the professionalism and power of the UK model has many admirers around the world.

But we can also always learn from others and one of the fascinating parts of the day was an informal lunch with some of the members of JACEVO when they talked about their own organisations and what they do and what their challenges are. It's one of the core purposes of ACEVO that we bring CEOs together to share experiences, talk though problems and learn. JACEVO is following this networking model too. I wish them well as they too grow in power and influence.