The role of Government, health and the Taoiseach.


Does working with Government hinder or help our sector deliver? The voices that loudly proclaim the dangers of taking Government money often miss the point of Government in working with the sector in delivering for beneficiaries.
I listened to a fascinating presentation yesterday from the former head of Obama's Social Innovation Fund, Paul Cartter.

He was arguing that social innovation is needed to support the non profit sector in times of financial troubles. He reminded us that whatever the financial problems let's remember we do still have huge resources. We just need to marshall them better.

We need to look more closely at what we do and how effective we are.
Innovation is not always about what is new but what is better. It is an important point. Too often we get told innovation is what is new and shiny. Nothing to do with old organisations. Or large ones.

Social Innovation processes has different stages. The early stage is the ability to find new solutions and ways of working.

But how to get to scale? We need to transition to scale which is where Government comes in because they are often the largest funder and enabler of change. Amount of resources in US that go from Government to non profits is 10 times larger than from philanthropy and foundations. So Government is the "funder in chief". Government is key to promoting innovation and we must consider Government as a key partner. But both are under performing.
He made an interesting point on scale. He said the top 10 largest non profits in the US have an average age of founding as 1903! So problem is not invention.
There are 30-50,000 new non profits a year in the States. But they don't grow to potential. Hardly anyone grows. 200,000 registered since 1970. Only 134 grew to over $50m. Hardly anyone is growing. I wonder what the stats are in the UK?

He also argues that we have inadequate interest in evidence. We can't establish that our programmes make significant difference to people. we often measure the impact of a project but do we know if what we do makes a real difference to our beneficiaries lives?

We need to find and to evaluate evidence on what interventions make for long term good. But we often don't.

So Government working with sector is important in developing positive interventions; for example the RNIB works for better lives for blind people by campaigning and providing services but it knows that only Government can develop national policies to make lives better which is why they developed the UK wide vision strategy and argues for Government ot adopt it. Which they did.

Meanwhile back in Blighty the NHS Mandate was published by Jeremy Hunt. It's good. It provides a real opportunity for the sector, whether that is in advocacy and community campaigns, or in research or in delivery of health and social care services.
ACEVO and the Foundation Trust Network (FTN) have welcomed the new NHS Commissioning Board mandate and we announced a new work programme to assess how NHS Trusts and third sector organisations can jointly contribute to delivering the new mandate.

The work programme between our two organisations will:

Results in a joint report to be published in spring 2013
Third sector organisations and NHS trusts already do a great deal in partnership; but there is huge untapped potential for us to achieve more. The UK has one of the most vibrant third sectors in the world, and one of the best health systems. Getting the two working better together could be key to the NHS's success in responding to the new mandate.
Chris Hopson, the new CEO of the FTN is an ACEVO member and I've been impressed with how he has grasped on this agenda as a way to develop Foundation Trust's work in better health outcomes.
And finally, a great evening at Trinity College. Had an interesting chat with the Irish Prime Minister. We got on well as you can see; 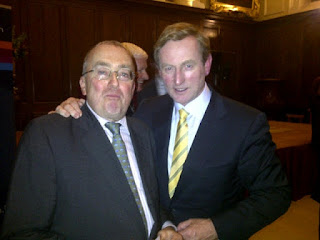 He made an interesting speech on the role and importance of Ireland's voluntary sector. 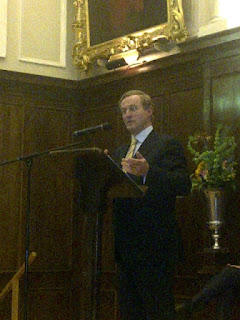 And finally, outside the birthplace of Wellington. My Great Grandfather x4, Colonel William Somerville Limrick, fought with him in India, notably at the Battle of Seringapatam. I didn't mention this to the PM! 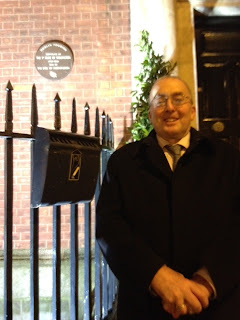