So what did you do at the weekend? I was in Tunisia with Stuart Etherington as it happens. Not a romantic knightly tryst but at a conference I better add!

The British Council had laid on the first of a potential series of leadership conferences to bring together delegates from across North Africa and the UK; one of the key themes being to role of civil society. Fascinating to hear the stories of those who had been involved in the events of the recent Arab spring and their thoughts about whether real change had been achieved.

We had a series of workshops on how civil society was developing; after all countries like Libya did not allow civil society organisations and where they did exist they were largely connected with faith organisations like the Muslim Brotherhood. Why, there was even reference to "Big Society" but it is not an idea that travels well, even with some of the leading BigSoc groupies present.

So one of the exchanges was on the role of the sector in service delivery and whether this was an appropriate role or whether that is what the State should do? I obviously suggested it was a key role; especially in challenging repressive state practices with, for example people with disabilities or mental health problems.

We heard how difficult it still is for organisations to protect minority rights. An energetic Egyptian from the Safadist party described how a protest from a group of disabled people who were merely demonstrating outside the President's office about their ability to access government forms were beaten up by the military. Gradually the same old people who ran systems under old regimes are emerging to run the new regimes, but wearing different robes.

It's always problematic to assume you can transfer learning from a civil society like the UK's where we have a thousand year history of development to emerging democracies. But I was keen to suggest there is one lesson that is that for civil society organisations to thrive you need strong leaders. They need support to develop their leadership skills and that is an area where we can provide support.

It is what we did through Euclid in our leadership programme for emerging civil society leaders in the Balkans. We had a work shadow exchange which worked well. Even I was involved with a prominent leader from Serbia.

I hope the British Council will establish something similar.

And obviously it was not all brain work. We had an exotic dinner in a tent and a visit to the old Medina and souk of Hammamett where I was mercilessly attacked to buy rugs, slippers and other tourist tat. I survived; apart from the bottles of olive oil and the dates! 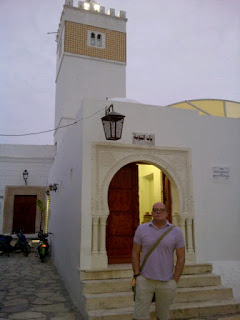