Yes, I know. You feel sorry for me. All those receptions, dodgy canapes and crap wine!

Started on Monday with the 10th Birthday of the Social Investment Group; one of the early pioneers of social finance in the UK. I've been Chair now for 7 glorious years. We were making loans when most people thought it a crackers idea.

A lovely evening in the British Academy in Carlton house Terrace; next door to Gladstone's old home! And a session with just some of our investees. We have helped 1,300 organisations through loans over our decade. Not a bad record eh! Indeed we heard from one of our earliest investments, in Liverpool and who have now been back for 13 different loans for their community enterprise (a cool £6 m in total). Nick Hurd MP was there to pass on birthday wishes from the Government. 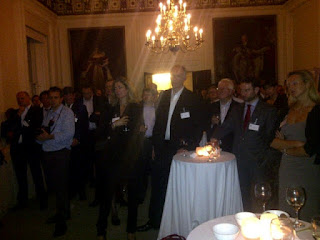 Then Tuesday was the Kings Fund annual gala reception. All the Health Establishment out in force. Met lots of friends and colleagues from my listening exercise days; including Andrew Lansley! Amusing chats about bizarre Observer article which they thought had uncovered a vast capitalist conspiracy to privatise the Health service. But then our sector loves a good conspiracy; facts no problem.

And tonight it's the ACEVO 25th anniversary Gala Dinner and the launch of our annual pay survey results. The dinner is at the Grange Tower Bridge Hotel near St Pauls. An occasion to celebrate 25 years of CEO leadership and the leadership of ACEVO in driving a more professional sector. We have achieved much in those 25 years. We will celebrate that tonight. Reception. Launch of Pay Survey, Dinner and Tani Grey Thompson as guest speaker. Then tomorrow our Annual Conference.

But let's be clear. It's not all partying. In the meantime we have had to respond to the Work Programme statistics. My comments in the Times today sum it up;

" Sir Stephen Bubb, Chief Executive of ACEVO, which represents charities said the Government’s handling of the whole affair had been a “shambles” as it had tried to spin the figures and shift the blame to benefit scroungers.

"The simple fact is that the Work Programme is the Government’s answer to long-term unemployment, and unless we want a repeat of the 1980s, with thousands left on the scrapheap, the numbers have to improve. It’s time the Government stopped spinning the data and started talking to charities about how we make that happen"