History in Europe and St Pancras 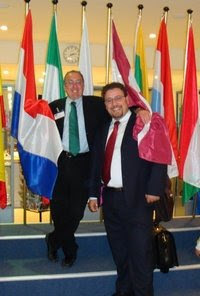 Just back from Brussels. The first time on the Euro star from St Pancras' station . And what magnificence : the station is the embodiment of the glories of our confident Victorian forebears ; building Empire , pushing boundaries , erecting temples to engineering achievement . And to think some small minded and anally retentive planners thought that this should be pulled down . I pay homage at the statue of John Betjeman who saved St Pancras for the world. And a more earthly homage at the champagne bar.

It was a let down to arrive in the dreary apology for a station in Brussels . But we must not be sniffy . Belgium has only existed since 1830. Not much to it really , though Im sure it was a happening place under the Austro - Hungarians. I arrive for a Euclid Board meeting. Euclid is the new European third sector leaders network that acevo has set up with our partners in France and Sweden . It is based on the simple proposition that leaders need to develop leadership skills and share and support each other , and such support should not stop at hte national boundary . We are at nearly 500 members across 18 countries.

We are having our first Annual General Meeting at the European Parliament. I have been appointed as the founding Secretary - General . We announce the election of the first President Thierry Weishaut from France . This is an historic occassion . A new force for change in Europe. Building a Europe for people , not institutions. Developing the leadership talent of civil society . In my opening address I talk about the early days of acevo some 20 years ago . Small beginnings and when we celebrated our 20th Anniversary we had a reception at No 10 with the Prime Minister lauding the achievements and the role acevo now plays in leading the sector. I suggest that I will be back with euclid for their 20 th anniversary in 2028 to celebrate similar triumphs...( me and my carer that is ! )

We have plans for a range of events and are helping develop leaders in countries in Central Eastern Europe . We have been awarded a contract from the Foreign and Commonwealth Office to build leadership in Montenegro , Kosovo and Albania. We are holding conferences in Paris and Slovenia. i have 2 exceptional and talented staff members working on our plans ; the irrepressible and Italian Filippo Addari and the guy who makes sure the detail is sorted , the quiet but impressive Ben Rattenbury. One of my Board members at the event asks me how do I manage to recruit such talent . More importantly, how do I keep them !

So have you joined ? Go to the aecvo website or the euclid website for more details. http://www.euclidnetwork.eu/

But before the Board meeting on Monday evening I have an hour to spare and I go and sit at a cafe in La Grand Place ;the one place in Brussels that makes you feel that Belgium is worthwhile. A cooling beer and coffee , sitting in the sun . I sit and stare . A rare moment of untrammeled peace. No phone calls . Blackberry in my pocket.

And our Board meeting takes place over dinner at a great Brussels restaurant. Belgo Belga. The griddled fillet steak and the Alsace Red makes the pain of a discussion on amendments to our Mem and Arts seem relatively painless. My Chair , John Low is our Board representative and he displays a real flair for pan European discussion ; explaining the nuances of "restricted funding " to a bemused Frenchman .

My major article in " Third Sector " appears today . I am suggesting the sector needs to face the challenge of economic recession and grasp the opportunities of the unprecedented interest in out growing sector. That means we need to consider the advantage of scale. Mergers. Alliances and consortia. I float the idea of a major Social Investment and Development Bank . I suggest the national umbrellas also must embrace change and perhaps develop a " Third Sector House".And in time perhaps we'll have a G7 for the sector ? Those at the top of the sector's senior bodies must be thought leaders .

How will this go down I wonder.?We will see at the acevo Chief Executive Summit tomorrow.

Interesting post, have you read Building Jerusalam by Tristam Hunt? a good few quids worth of stuff on the role of Victorian civic folk.

It strikes me on reading this post the nature of the chasms that run through our societies. Much of the third sector is motivated by a drive for social justice while the you eat fillet steak and drink continental lager, visit champagne bars and generally flaunt what appears to be living the high life.
I am not suggesting that we must be all hair shirts and self flagellation. But at a time when so many CVS projects are really struggling such ostentatious behaviour sticks a little in the craw.
I was also reminded of what Jim Collins wrote about the worst thing the social sector could do would be to imitate the mediocre practice of the private (and public sectors) sector...
How is a G7 of the third sector going to help at the grassroots? Won't it just mean that even more of the funding available to the sector will be absorbed a long way from the frontline of the fight for social justice.

I am interested in this post and the overall function of aveco. The subjects and agendas are increasingly important however the actions and investments do not appear to match the stark reality of what is needed.
The post refers to "A new force for change in Europe. Building a Europe for people , not institutions" To be achieved we need the 3rd Sector and its leaders to differentiate itself from the public sector. It must put 'citizen' at the top of the agenda and place social inclusion and accessibility to services and health as key priorities.
It needs to look at what New York has achieved through its "311" strategy and being repeated in several cities across Europe and examine the model office for Social Development in New Zealand. We must have our 3rd Sector CEO's pressing the Ministers on these matters and asking why is it that the UK is falling behind in the way we care for our people. Might this be a reason we have increased knife and gun culture amongst the younger age groups.
This is where the 3rd Sector can deliver that which the Public Sector and DWP cannot.
Forget the cosy meetings with dignatories and Ministers, please dont tell us about the Champagne bars and Fillet Steak along with comments which the Belgians may regard as insulting. Tell us about how aveco and you can make a difference by being what the Public Sector cannot be. Tell us what you are doing to make this a "Europe for citizens and not institutions". I think I will become a Commercial member of aveco to help you do this.

I've just been on holiday in Albania and Kosova. Good luck with your work there.

The existence of two parallel civil societies in Kosova is really depressing. Serbs and Albanians have totally separate institutions and limited interactions.

I might have some concerns about the cohesion agenda here. But there is a desperate need for bridging there.