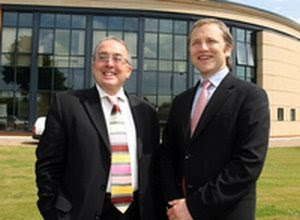 Up to Nottingham with James Purnell , the brilliant Secretary of State for DWP. We are launching the Third sector -DWP task force which acevo has set up with officials in DWP to look at how the Third Sector can support the reform of welfare to work. Our sector plays a crucial role in employment and training and we offer " unique value added " as James says at the launch .

I travel up to Nottingham with James and we then do the launch at a conference and move on to visit " Working Links " , a fantastic organisation with a range of contracts from DWP to deliver employment services . It is run by Keith Faulkner , one of my members who I expect to see but discover is in China on holiday ( celebrating his 65th birthday someone whispers ! ) . It is also a rather unique organisation as it is a private , public , third sector partnership .

Also on the train going up is Graham Allen , the MP for Nottingham and who unusually is the chair of the local strategic partnership . There is also a pioneering city wide welfare to work strategy. I've known Graham since the 80s and it is good to see him again .He is a great example of a dedicated constituency MP.

I should , of course, add that I am travelling in steerage whilst the SoS is in First , so I have to sneak in to chat once the ticket guy has gone . Although David Cameron obviously thinks we should be the" first sector " rather than the third , regretably that does not extend to him paying fior our first class travel . Still , once we are all making healthy profits under the new Tory policy of charities making profits then we might be able to upgrade .

The more I see of James Purnell the more impressed I am . He is great talking to the punters ( there are a bunch of third sector leaders here who give James a good talking to on the need for local and regional contracting ! ). He really " gets it " on the role of the sector and when I first proposed this idea he quickly spotted the potential . No long debates and internal discussions whilst the official machinery debated the merits and demerits. He got the point .He wants action . Now we must deliver that for him . it gives us great kudos as an organisation to have the SoS doing the launch . and acevo and Bubb get several great name checks . And a photo shoot afterwards of me and James looking at a hedge. So look out for me in the Nottingham Evening Post.

I get a chance to talk to Helen Vose of the Nottingham CVS, a good acevo member . She promises to pull together some thoughts for uor task force. It is being chaired by Tony Hawkhead of Groundwork who I hold in very high regard. We pulled off a major coup im getting David Freud as the Vice Chair and Stephen Timms , the Minister for Employment, is on the task force with a watching brief . High powered people delivering a high powered report ...we hope.

Of course we have had some interesting discussions on who should be on the group ! Nothing excites so much as a battle to sit on committees ! I'm rather more interested in the output. So fingers crossed for a great report out in January.