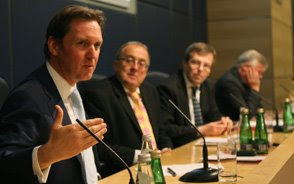 Our Annual Chief Executive Summit . Our Chief executive members coming together to discuss and to learn . This year we were overbooked. And this year it was an interesting combination of political discussion and learning about leadership developments.

It is a sign of how the sector has grown in influence that we had Greg Clark MP , the Tory third sector spokesman and Alan Milburn MP , the former Health Secretary, talking about their perspectives on the sector . Both gave good presentations . Greg had the first chance to talk to the sector's leaders about plans laid out in their Green Paper launched last week . His comments on the Lottery struck a piratical cord . Acevo has long campaigned for the Lottery to be established as an independent foundation . Freed from the constraints and controls it has as a Government quango. This is exactly what they need to do . Good.

Alan Milburn talked about how power needs to pass from the State to the citizen . How local communities and citizens can control services. He was radical in his approach and talked of a wide reaching extension of individual budgets , for example for the unemployed to control their training budgets . He had recently spent a day with our acevo members in Bradford and told us how inspired he was by their work . He sees a big expansion of the sector , not just in delivering citizen focused services , but in campaigning and advocacy as well . The citizen voice is no longer just articulated by political parties. A far reaching speech and further , I suspect , than Ed would go . But the thrust was spot on . And today's Third Sector email alert is full of his proposals , especially the idea of a Community Empowerment Act ; statutory backing for the Compact and the Commissioner and a settled place for civil society in the Constitution . Acevo strongly backs this.

A range of leaders from our sector and outside had interesting perspectives for us . I liked the story about Helen Keller , the deaf and blind campaigner. She was asked by a journalist ( American ! ) " what is it like to be deaf and blind " . Well . she replied " it is better than being able to see and have no vision ." Her vision of a better future for the blind and deaf led to the establishment of wonderful institutions here and abroad. One of those truly inspiring sector leaders who achieve so much from so little.

Then there was the CEO who said we all need to find time for ideas ....even 10 minutes walk in the park just kicking the leaves . One assumes an activity he does not just in the autumn. And the other CEO who said he has a quiet room for staff to relax in ...and even have a quiet nap if they need it . My deputy CEO , Dr Kyle, thought that a wonderful idea. But not one I shall be following up .

The event was buzzing . The only down side was a report I received of funny goings on in the Rockpools breakout session where they asked how many people read my Blog and only 3 admitted they did . Shameful . But I bet the others are closet readers.

And on the train up to Charlbury ; get a text from Stuart Etherington , recommending Don Carlo at Covent garden which he says is wonderful . I am pissed off , as I tried to get tickets but could not! He is off to Whitstable for the oysters . A fine man Stuart !!

So that was yesterday . Today I had my director's team up at the cottage in Charlbury for a strategic review of where we have got to and how to develop. An enlivening day . My neighbour made lasagne's for lunch . We have an interesting discussion on the role of the CEO. A suggestion on how to channel his energies and on the correct use of emails and to whom . We are even going for Investors in People accreditation I'm told . All very interesting . The roses , especially the climbers along the walls look magnificent . And as they are the old variety ; smell gorgeous. I am lucky to have such talent ( we are talking my Directors rather than the roses ) as they help me drive us forward . I see them off on the train , back to the smoke. And I meet one of my neighbours , running the local Charlbury and Woodstock Labour Party ; she is bemoaning the fact that they have lost their Treasurer. She went off and got married . At 86. Its the invigorating country air you know.