Bread and ...Roses too 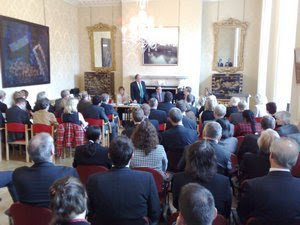 No II Downing St. 8am . Launch of acevo report on the relations between the trades unions and third third sector. " The Way Ahead" was commissioned by acevo and written by Nita Clarke , a long time union official before going to work in No 10 for Blair on Government and union relations.She now runs the IPA ( The Involvement and Participation Association ) and is an acevo member.Nita is a star . Her husband is an old friend from days in Notting Hill ; Stephen Benn , son of Tony. Her daughter is the youngest ever parliamentary candidate.

I was up at 5.45 am preparing , as I was going to be Chairing the event and we had 2 Minsters coming as well as various Union Officials. I prepared my speech ; heavy on nostalgia ( which I do so well ) . Of course my first real job was as Research Officer for the Transport and General Workers Union under the great and charismatic leader Jack Jones. he remains for me the most inspirational Boss I have ever had , but for as far as my staff are concerned it's " Jack who ? " So I felt at home on this subject.But you need to prepare . especially if you want to appear effortless . I do not do set speeches , or read from notes . It just does not work . But to do that requires more preparation .

So , early in the morning , ( Today programme in the background ), I dig through my collection of memoirs and books on old trade union leaders and find a brilliant story in the autobiography of Jim Griffiths , one time NUM official and Deputy Leader of the Labour Party , and a Minister under Attlee. He describes a strike in the States , which was not about the usual pay issues , but about the dehumanising work conditions . On the demonstration the union marched behind a banner which proclaimed ;

I suggest this is a theme that unifies the trade unions and the third sector. Our vision of a better society . A tradition we share. I read this story from the Griffiths book , but as I pick it up I notice my Deputy , Dr Kyle , who is lurking menacingly at the back of the room and is pointing at his watch . As if he thinks I am just going to go on and on , mesmerised by speaking in No 11 , with 2 attentive Ministers by my side and a room full of my wonderful members and other luminaries ! A good speech none the less , he blogs modestly. though i think the prize went to Calre Tickell ., the CEO of NCH who spoke last and has a great style , slightly self deprecating but killer points ! And Tom Watson , who I have not heard speak before, was witty and engaging and a great down to earth touch which had his audience ( we are a difficult bunch after all ) wanting more !

Phil Hope MP , our Third Sector Minister , makes an impassioned speech about the need for the sector to upskill , to take advantage of the " train to gain " scheme. he is right and acevo must do more ot make members aware that ther eis money for this. Always welcome news.

The nostalgia theme runs away with itself as we have a competition between speakers and questioners who are dying to tell us that , once , many years ago they were a .....trade union convener , official , worker on the shop floor in the sector....you get the picture . My fault for starting down this track.And I am trumped by the Unison Deputy GS , Keith Sonnet , who reminds me of my Lambeth past but suggests that may not be now on the CV ? Cheeky. And it depends.

On guy in particular it is good to see . Ray Collins , currently the deputy General Secretary at the union Unite. He and I worked together in research at the T+G. Rumour has it 9 and I could not possibly confirm it from my conversation that he is to be the new General Secretary of the Labour Party.

This is an important report. Get it from the acevo website . It is fantastically written. We now have to carry forward the recommendations Nita has made. I commit to trying to do so . And Tom Watson MP , who is the Chair of the Public Services Forum says he wants to meet to talk through action and how they can help . We shall do this . I am also writing to Stuart Etherington of ncvo to suggest this is an agenda we need to work together on . We have a shared view and both acevo and ncvo are on the Public Services Forum , (with the CBI and the TUC ) , representing the sector.

i leave No 11 reluctantly . But work beckons.