" Dante, and the puzzling missing Pope " 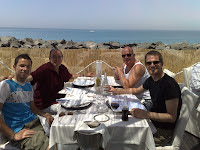 Dante, as you spotted (and in English: In the midst of my life's path, I found myself in a dark place, having lost my way)

I used the quote in my closing speech in Rome at the launch of leader2leader. In Italian obviously. I was illustrating the need for networks to support and advise third sector leaders.(Yes, I know a little tortured but it is always good to flatter.) The role of a CEO can be a lonely one and often it is the support of fellow CEOs that provide a path through. It is why I suspect we will see more national networks of third sector organisations. And why Euclid will grow.
Anyway the Italians loved the Dante, even if my staff looked mystified! It was a great end to a wonderful day in the Parliament and then, as you would expect, off to a great dinner with our colleagues to celebrate in true Roman style with good food and wine. A typical osteria just off the Piazza Farnesse. It was great to raise a toast to the success of the launch and to wish them well in recruiting leaders from the sector to this new enterprise.

It was fantastic to have a number of compliments on my staff team. Apparently what really impressed the Italians was how young, dynamic and talented they were. They were expecting much older people to be presenting! My team really excelled. Very professional PowerPoints from Elizabeth, Erin, Seb and Pippa and all well delivered.

It is always rather special for a CEO when they see their team performing well and bringing credit to the organisation. But it is true that acevo has got a reputation for a talented bunch. We may be a small team. (Only about 35 of us) but, by goodness, do we punch above our weight.

.... I had pizza at the dinner (as you do). With a fine Frascati which made the subsequent wander round the moon drenched streets and piazzas of Rome even more enchanting. The mighty floodlight Bernini Dome of St Peter's looks magnificent seen from the Tiber in a full moon the majesty of the Roman Church watching over us.

Saturday was a chance to visit some of the places in Rome I have not seen before but with no particular plan and nothing so tedious as a tourist guide I pop in and out of churches: two Michaelangelo statues, St Peter's Chains , a George E Street Church (an architectural gem ), the tomb of Raphael and the 2 Italian Kings and a brilliant Fra Lippi fresco. But was it hot - 37 degrees! I heard that London was in drizzle. Excellent - always so much better to hear about bad weather at home when one is in the sun.

And the evening was at the Giggetto Restaurant in the old Jewish ghetto. Sitting outside in the balmy evening, overlooking the Portico d'Ottavio erected in 146 BC. I was with my partner, my Deputy and his partner, and my Head of Policy and his partner. We were serenaded by a wandering minstrel, and a mark of what a wonderful team we make is that we did not feel the need to talk shop. The food was great; let me just mention the artichokes cooked Jewish style and the lamb. And 2 bottles of Proscecco!

Rather late back at the hotel owing to the need for the youngsters to visit various bars and the Julius Caesar club where I left them partying till the small hours! I went to bed as I'm old and quite haggard enough.

Sunday and still no message from the Pope so my day was spent at the beach and a beautiful fish restaurant. Such a shame then when the BA flight is delayed by 2.5 hours. But I catch up on the Sunday papers. I spot that" the tie is back " (headline in the Sunday Telegraph). Apparently John Lewis report on a 17% rise in tie sales. Workers desperate to smarten up in a recession, as they say! Good.