What do we want?


In Leeds to meet with members to talk about our "ask" from the Parties in the election campaign. It's  clear this will be a close-run election. All to play for. So a chance to push our big ideas on what Governments need to do to advance our role. Let's face it, the 3 parties have precious little narrative so on the third sector. Disappointing when you consider how important a role we now play.
‎
Big discussion on where the public service debate has got to. What advances we have made; a patchy record in the Work Programme for example. But also a feeling that there are opportunities. For example our member from a local hospice was looking at new developments. A lot of discussion on bad practice in commissioning, particularly mass bureaucracy (and that included some harsh words for the Big Lottery Fund).

When we have our regional meetings with members we always have a round up on governance and leadership - which is at the route of what acevo does with our CEO membership.  I was amused to hear of one member who said he has a trustee who has been on his Board for 52 years. Is this a record I wonder?

And we had our meeting at the Foundation in Leeds; an organisation working with the homeless and the socially excluded. Led by a dynamic CEO it is housed in the wonderful buildings that were  once part of the massive and magnificent Church of all Souls in Leeds. Once a hugely rich part of Leeds, it is now less affluent but the Gilbert Scott Church (the very last building he designed, he died 2 days after completing the design and his son built it) is a major focus of the community. This Church is well worth a visit. I popped in and found the church organist there happy to give a guided tour.

It was no expense spared when it was built and so there are Kempe windows and paintings as well as a splendid font. 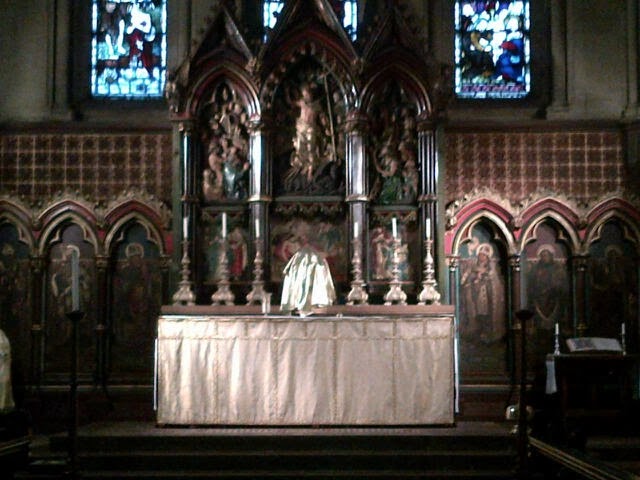 The panels that surround this stupendous piece of architecture are by Emily Ford, a pre-Raphaelite and suffragette. The panels are being carefully restored.

The organist regaled us with dark tales of previous incumbents. The chap who thought he saw a devil on the altar reredos so had it covered with flock wallpaper and the Priest who stole lots of the movable church treasures. The church may have a declining local population but there is a massive attendance by the Leeds Ethiopian community who also use the Church for the Ethiopian coptic church services. 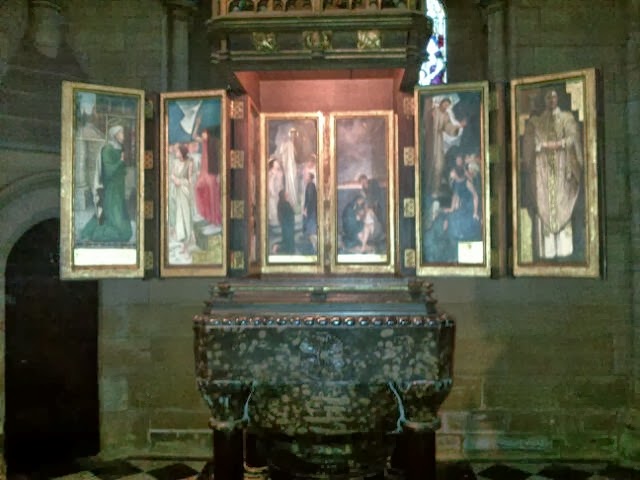 Back in time for an Odgers reception for their health service clients. Lots of the top decision makers of the NHS so much networking. Such is life as an umbrella CEO!