We are lucky that this country has a very low incidence of corruption- in the sense of money changing hands for contracts etc. - unlike the record of so many other countries. But it seems we do suffer from a form of corruption that is demonstrated by a culture that puts organisation and staff before purpose. The NHS, whilst admirable in so many ways that so many of us are glad of, has a culture that is corrupted. It is a form of corruption when a report exposing failures that led to children's deaths is suppressed. Coming on top of Mid Staffs this may expose a wider problem in the system.

The CQC scandal is only part of a wider problem that sees patients as a lower priority than the welfare of the organisations' staff. It should be unthinkable that a regulator charged with guaranteeing patient safety did the opposite. It is hard to credit that whistle blowers were treated in the way they were. That the one non exec on the Board was subject to a campaign of vilification. Let's wish David Behan, the new CEO well in cleaning it all up.

But the signs are that the culture is changing. Public pressure will help. A growing understanding that the NHS can be flawed and that there are good and bad hospitals. I'm clear the majority of managers and staff are dedicated professionals who do a good job, which the emerging CQC scandal undermines. But its time to reform the culture. Jeremy Hunt is on the right path in demanding more openness and more information given to patients and citizens. Deference to doctors is dying out and there are many in the system who want change; those in the NHS Alliance for example are good models and there are CCGs around the country who will start to get increasingly insistent on change. Our sector can help this process by ensuring people have access to information and are given advice about how to use it. How about Citizens Advice Bureau services expanding to tell people the best doctors, surgeons and hospitals to go to?

In the meantime, back from Liverpool I've been back at my old college (Christ Church) for our Gaudy: a chance to catch up with contemporaries from my year of 1972; now amazingly 40 years on. A sobering thought that I am unlikely to be at a future gathering in another 40 years time. Indeed as time moves one ones contemporaries start dying out! Hopefully I shall make the next Gaudy in 7 years time. But thereafter; who knows? The Dean gave an elegant address poking fun at the fashion for impact and outcome analysis as opposed to the sheer value and importance of the education process itself. Useful that David Willets MP, the Uni minister- a contemporary of my brother from 1974, was sitting close by. There is value in the study of classics, even if the “outcome” desired by the accountants who like to add things up is more intangible. And amusing to note that this near 500 year old organisation managed to run without any governing statutes for centuries. Henry V111 didn't get round to them before he died. His son had a go but didn’t manage them before he died and then it just got forgotten. The place did in fact manage to operate quite successfully without. The good old English tradition of “common law" sufficed!

So let me leave you with 2 images from the Gaudy as I spend my Friday recovering from the events of last night. 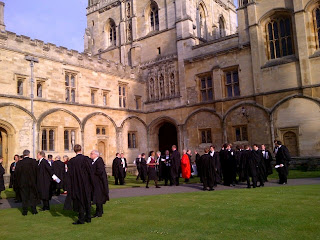 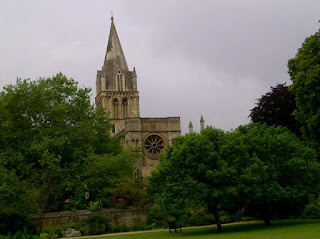