Lobbying, Google and the Queen.


Well, its not every day you meet the inventor of the internet. Even a technophobe like me was impressed I was chatting to Tim Berners Lee! It was the Google Global Impact Awards. ACEVO has been helping Google run the awards and I have to give them credit. This is the way to do it. A short, sharp process. Minimum hassle and form filling. And a big reward. So 4 prizes of a cool half a million each.

The award process yesterday was equally to the point.  10 finalists out of hundreds sifted. Each had a short film presentation that Google helped prepare.  Then, a short statement and questions from the 4 judges.

A range of good ACEVO members there. And the result;

The judges awarded 3 of the prizes to;

But the 4th award was a result of a popular on line vote where over 100,000 people voted. And this one went to the Zoological Society of London for a fascinating project to track wildlife and wretched poacher activity through app technology.

And the surprise at the end was that, unknown to us, Google gave each of the other 6 organisations 100k. Now that's some consolation prize! 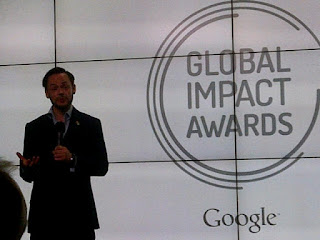 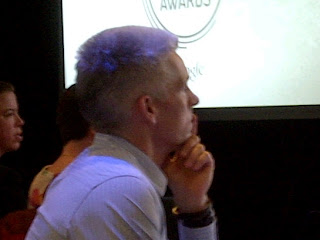 I had turned up at the event in full pukka black tie because I was off to a banquet to celebrate HM the Queen's Coronation anniversary. Amusingly the Google lot didn't bat an eyelid as they tend to wear all sorts of odd stuff as they are IT geeks!

The banquet was a splendid affair. I was with the Sector's head hunter of choice, David Fielding. The Dean of Westminster gave an address and we had HRH the Duke of Kent in all his gear there. We heard from a choir boy at the ceremony 60 years ago. And a choir singing selections from the Coronation. All rather wonderful. I wish I could bring you my own recollections as I was in fact present in front of a TV watching the actual Coronation 60 years ago. However my memory is limited, perhaps because I was only 7 months old.

As befitting such an occasion the wines were rather splendid. A shame I had to be up early to do an interview on Radio 5 Live on the lobbying issue. I felt a tad weary as I made my way to Broadcasting House. But I gave a robust response to the interviewer who thought charities should be covered by a Register. I rebutted this.   I agree there should be a Register of lobbyists for private benefit but do not believe charities should be covered. We should be exempt because we lobby for public benefit. The problem is we now have a situation where all “lobbying" is seen as dirty and bad. It isn't. Charities must lobby. It’s what many of us do. We lobby for older people, for younger people, against abuse of animals and children and for better treatment of the disabled. All good things. Indeed a vibrant, active civil society is essential to an effective democracy. We must lobby. Trying to limit us or put obstacles in our way or create more red tape is wrong. We must resist this extra burden and make the case for charity lobbying.

As I mentioned this morning, Australia has a robust register of lobbyists. They exclude charities. Rightly so. I don't want to be tarnished with the bad odour of commercial companies and shady interests who need to be regulated and registered. We operate for public benefit by definition. So leave us alone.