Well, 25 years ago I remember getting the ferry cross the Mersey. You know the song. A cool journey which takes you from one side of the Mersey to the other; from Liverpool to Birkenhead. So obviously I thought ill get that again. Only since I last travelled they have built a tunnel and there is no passenger commute ferry, only one that meanders up and down Mersey full of tourists

I was due at Birkenhead YMCA: the start of a day of visits to some of the Social Investment Business investees. In Birkenhead, Futurebuilders gave the YMCA a loan to pull down their old building and start afresh. A top class CEO and Chair. Doing some great work and with ideas to expand into half way housing for their young clients. The bedroom tax and welfare cuts are proving a major disaster here and they need to find small size accommodation for their people as they move on. Interesting to hear from those working in the homeless- jobless field how the changes are working in fact. Some appalling stories of benefit changes leading to homelessness, and how some of their “rough sleepers" actually have jobs- but can't get homes and are forced out of work. They are looking to take more loans to acquire homes! They were falling over themselves to say how grateful they were to Futurebuilders and how their work would have suffered without the loan to rebuild. A standing rebuke to the Government for cancelling this programme that enabled third sector bodies to access capital. At the time we were told that the new Big Society Capital would replace the need for this programme but so far demand for loans is not being met.

The YMCA is particularly important in the history of charity. The Scout movement was founded here. In the Birkenhead YMCA. See the plaque 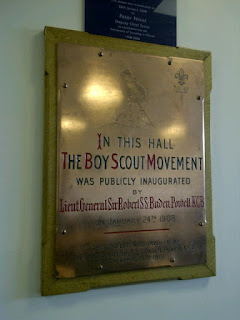 Then onto an old favourite of mine! The Alt Valley Community Enterprise. . I came here 7 years ago and the empire continues to expand. Shops, a farm, a church, a warehouse, community uni, library, leisure centre... There appears to be little left in Croxteth that they don't own or control. The latest acquisition is a pub. As they said - it’s a community hub!!  And they're right. Its right next to their “community uni" and their leisure centre. We have given them over 5m in loans over the years but with that they have done much. It is a magnificent demonstration of the power of capital to grow. I suggested to them we should help them do a study of the impact this has had. It would make a magnificent case study. And to those who say the work of Futurebuilders was all soft money I say; nonsense. See what they have done. And they are repaying the loans!

Next up, Riverside Credit Union. A small but dynamic operation. Amusing to walk past a poster proclaiming “we are NOT a bank but so much better ".

All 3 bodies have plans and ambitions to grow and could use loans to do so. They want access to capital. It reinforced my conviction BSC must get cracking with unsecured loans to enable these people to do their jobs effectively.  We must disgorge funds so we can meet this demand.
The latest survey by SIB on demand for loans shows a total of over £350m has been requested from the 285 organisations who responded to the survey (that has been open since July 2012).

41% said that over half their income in 2011-12 was earned from contracts and other commercial activity so showing ability to repay loans.

67% of those who specified how much they would request asked for amounts over £100,000.

So demand is high. Supply negligible. Let's get this sorted.

Then off to the “Municipal Buildings" (a grand pile) for a meeting with the Deputy Mayor of Liverpool to talk about the potential for an idea we are developing for a local impact fund. He was keen to talk about our plans though as a barrister he had lots of issues for us to puzzle out. Amusingly I discovered he knows my Irish cousin Tom Somerville who turns out to be in the same chambers. And he did have a nice office.

And I even got a bit of culture; the Chagall exhibition at Tate Liverpool (well worth seeing) and a bit of Choral Evensong in the magnificent Anglican Cathedral.  Liverpool is superb. There are several of my Irish cousins buried up here- one was a doctor and mayor public figure and related to Bishop Chavasse who came from the same village in Co Cork, so I feel a connection. Though not with the accent.

Liverpool in the sun was particularly gorgeous; though my planning for the tour got a little adrift when I suggested we take the ferry across the Mersey. A 40 minute gap appearing in the itinerary and playing havoc with the investees! But a rather cool cruise nevertheless.
Stephen Bubb