Building on our strengths!

A brilliant evening in Topsham on the mouth of the Exeter estuary in Devon. Staying in a small 16th century former coaching Inn. 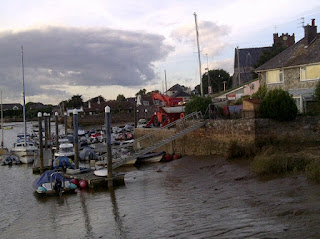 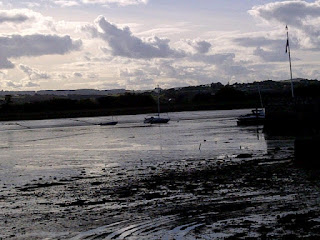 And good to meet up with my Devon cousins, Terence and Sandra. We grew up together in Kent but then my Uncle Francis moved to Devon so we lost a lot of contact. Really excellent to catch up tonight. Oh , and I discovered a local vineyard, Pebblebed, which produces a passable champagne! 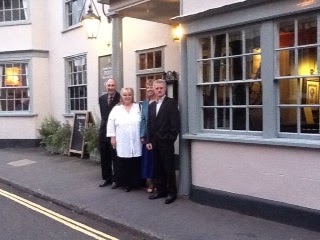 And to continue the wildlife theme of this week I went to see the Bowling Green Marshes sanctuary belonging to that wonderful charity, the RSPB. This is an internationally renowned reserve, home to thousands of migratory wading birds in the winter. It's on the Exeter estuary and is a particularly beautiful spot. It reminds us of the importance of the work of charities like RSPB. The real defenders of our environment. And we will need to support them more as the Government tries to encroach on the green belt and dilute planning controls.

And then first thing off to the Exeter Football Club grounds for the AGM.

I said I'd tell you what you what I was going to say so here it is;

"No one can doubt the challenges our sector faces in speaking up for the marginalised and vulnerable and in delivering crucial services to communities and citizens. Recession and public spending cuts will remain a feature of public life for possibly a decade.

So our organisations and those we serve face some of the toughest tests in a generation. Now is the time for us to be united as a sector, not divided.

And yet our sector is divided. Two stereotypes are at play. Big charities are often seen as the third sector equivalent of Kraft (predatory, foreign, corporate) while small charities are stereotyped as the equivalent of the village shop in the League of Gentlemen (loud, incompetent, and ever so slightly weird). We need to acknowledge that both stereotypes are false, that both large and small organisations share common cause, that we are platoons in the same army. Division and argument do not help our beneficiaries.

Are we too quick to criticise the private sector for aggressive competition but too slow to recognise the value of partnership and cooperation between our own organisations? I know there is often talk of mergers in our sector but in my view more emphasis should be put on partnerships and alliances.

Every so often there are complaints about one organisation or another having " stolen" a contract. Arguments about unfair competition. Or unfair advantage. National bodies riding roughshod over local and well established organisations.

Of course there will always be controversy in this area. After all, we know the public sector is not very good at commissioning!

But if we put the interests of beneficiaries first then is it time for a more productive relationship between big and small, local and national?
We are a hugely diverse sector. Large local organisations. Small national ones. Large national bodies that are federated like Age UK and the Scouts. Community based, volunteer led bodies like the Kingsbridge amateur dramatic association whose summer production I enjoyed recently. Or Alzheimers who have worked closely with many other charities to develop a dementia alliance and strategy. Or RNIB who have worked across sight loss charities to develop a UK vision strategy. I know from my own experience the unique contribution that smaller locally based bodies can play, often in a way others cannot. That was why the Future Jobs Fund was so successful because it enabled small organisations to deliver jobs but not be saddled with the cumbersome necessities of public sector tendering. Scale can sometimes be important. But local knowledge and connections and "rootedness" in the community are a special prize that commissioners smother at their peril.

ACEVO is working to support partnership working between large and small organisations in our sector.

We have developed a toolkit to support consortia working. One of the organisations we pioneered this with was the Hammersmith CVS . We intend to significantly expand our support in this area over the next few years.

We are working to ensure national policies on commissioning recognise the particular nature of our sector and both encourage consortia working and do not strangle the role that local and community based organisations can play. So, for instance, ACEVO proposed and developed with DWP the code of conduct that governs welfare-to-work subcontracting, and then the Merlin Standard to give it some teeth. We need to continue strengthening these measures, and to ensure they are applied to other areas where subcontracting is set to become the norm, such as work with offenders.

ACEVO has a particular strength as a national body of leaders but we too need to work in partnership . So I am committed to developing the links and connections we need with NAVCA as the organisation that represents the CVS movement nationally. My top team and NAVCA will meet soon to talk about how we work better together.

I recognise there are some difficult issues, and we don't have all the answers here. But what seems certain to me is that the decade ahead requires us to bury the Kraft and League of Gentlemen stereotypes, and to collaborate more in the interests of our beneficiaries. The diversity of our sector is one of its strengths. We need to harness that strength rather than concentrating on our differences and our divisions."

And I was impressed that my friend Joe Irvin, Head of NAVCA was able to respond in a speech he gave to Bromley Community Links CVS ;

“The sector needs to stick together during the hard times. Reduced funding and competitive tendering will encourage division but turning against each other will do nothing for the individuals and communities we are here to help. The voluntary sector is stronger when it works together. And this is a message for NAVCA as well. We need to work together better with other national umbrella organisations, something I have made a priority since becoming Chief Executive in January. You may know we are looking into a merger with Community Matters. We are also talking with other national umbrella organisations to see how we can give the best possible support to the voluntary sector. One example of this is that we are meeting with ACEVO to explore how we can break down barriers between big and small charities.”

Now back to London I’d better show my face at the office or they might forget me. Difficult to conceive I know! But I can't quite put the travel bag away as it's the Euclid AGM next week in Copenhagen. It's great to see how Euclid has grown as a network of European third sector leaders. Modelled on the acevo concept that you need to develop Leaders of organisations if you want to develop civil society. My role as Secretary General is a great honour; particularly as this means the hard work is undertaken by the Director, Filippo Addarii and the Euclid team. I do the hold handing and diplomacy, and ensure thee strategic direction is correct (not am easy task in the European context).