Yesterday I wrote to the Chancellor expressing the concerns of members about the growing funding storm facing our sector.

Here is the letter we sent;

"Today the VAT rise will hit the work of the country’s charities and wider third sector. For example Sue Ryder Care will loose £1m this year, which could have funded a 16 bed hospice for 6 months.

In April, unless HMT reverses its current position on Gift Aid, charities will loose a further £100 million when transitional relief on Gift Aid comes to an end.

We estimate that these changes, combined with cuts in grants and contracts from the public sector, will cost our sector over £1 billion next year – rising to over £3 billion a year by the end of the parliament.

And yet demand for our services continues to rise.

That is why it is so vital that Government act to protect our work. Without action, I fear that your laudable ambitions to cut the deficit in a way that is fair and to build a Big Society are at risk.


So I am urging you to introduce a one off tax on bankers’ bonuses to go straight into the new Big Society Bank. The Government’s public service reforms have the potential to result in significantly greater delivery of public services by the voluntary sector, offsetting some of the damage that the cuts and tax changes above will inevitably inflict. But that potential is unlikely to be realised if the sector remains as undercapitalised as it is currently – hampered in its ability to transition to new public service markets, or to operate under the capital requirements of a system of payment by results. The Big Society Bank is therefore key to the sector’s ability to play its part in your public service reform agenda, and ultimately key to offsetting the cuts coming our way.

The money from dormant accounts currently earmarked for the Big Society Bank, at least in its initial (and given the speed of the Government’s reforms, crucial) stages will go nowhere near to meeting the need of the sector now. Hence my call for a one-off tax on bonuses.

I would like to come and discuss this with you (along with some of my key members) and to explore the idea, and others, in more detail.

I can assure you there is considerable concern in our sector at the gathering storm. Only firm and radical steps by the Government will alleviate the problem. "

We are also arranging a meeting with Nick Clegg- who is supporting a further tax on bank bonuses, but also a meeting with the top banks. We want to explore with them how they can support a Big Society Bank and how the bonus going to charity could be a good thing for them.

And meanwhile the celebrations continue. Yesterday I celebrated with my truly magnificent and talented ACEVO staff team. Here they are gathered behing me as I open the Knightly bottle of champagne ! 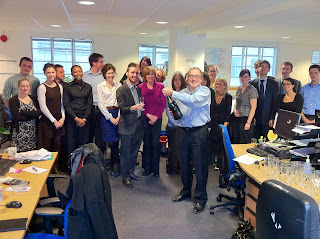 And here is one from New years Eve of the family celebrating with me at the gorgeous Port Light Inn on Bolberry Downs, Devon. 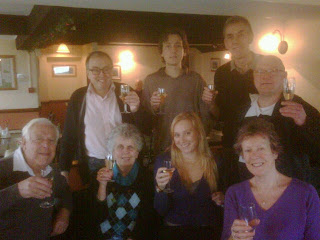 Got to love the idea of subsidising the work of charities through taxation. I thought charity was about voluntary donation. About compassion. About giving.

How about charities doing what they should be doing and making a powerful case for bankers (and others) to give and demonstrating their effectiveness at taking those gifts and turning them effectively and efficiently into social value?