Apparently it's the most dismal day of the year - according to The Today programme this morning and it certainly feels it.

I was off in the pouring rain to listen to the PM's speech on health service reform at the RSA. I've already blogged on this, and indeed done a piece for The Telegraph! Of course this reform is controversial. It is a gamble. It takes place in uncertain financial climes. But it could herald a new relationship with our third sector. It is going to happen and so we need to ensure it rolls out in a way that enhances our role to deliver services and promote the voice of patients.

He spoke about the importance of public health and the need for preventative measures in the face of rising problems like growing long term conditions. He spoke of the important and valuable role of charities and social enterprises. He made a point that previous Governments had failed - the Tories because they were too pro private sector and Labour as they were too pro state. What is needed? (I wondered if he would say "a third way" but he didn't!). He says we want more of us involved. We must take up that challenge.

We need to empower citizens and grow the role of our sector.

I asked the PM how he was planning to promote the role of charities and social enterprises in the reforms, as otherwise the private sector may win out. He made clear his strong support for an expanded role and talked of the great work of organisations like Marie Curie and made the killer argument that what patients want is a superb service, nor worrying about who delivers it. He is right.

A very strong performance from Cameron and a powerful speech. It could almost have been Tony Blair speaking! 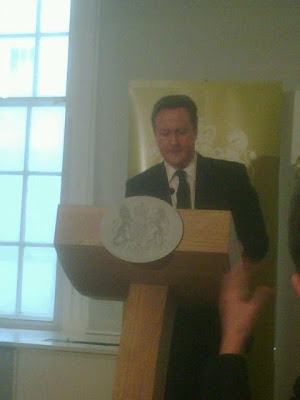