Thursday morning saw a rather different type of meeting; at the College of Arms! I was there to meet Clarenceux King of Arms to discuss what might be appropriate as a newly knighted coat of arms. As it happens Patric Dickinson, who holds this illustrious post, is an old friend from Oxford. He suggests that though some people like to incorporate a play on their name in their Arms he was not sure a champagne bottle was on their approved list(though appropriate as it was as he recalled!). 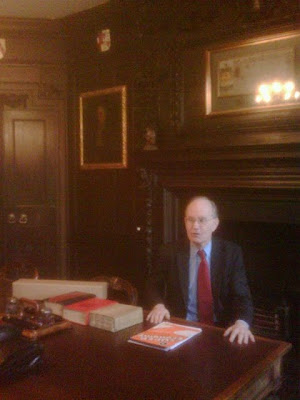 Patric Dickinson, Clarenceux King of Arms at the College of Arms

In fact I am going for historic connections, particularly with the Limrick name. My ancestor Sir Edward Neville, knighted by Henry V111 and then beheaded for his adherence to the Catholic faith, seems a rather good role model. Speaking truth to power!

My Open Letter to the Prime Minister in The Times today is a good example of that "truth speaking" role that I continue. Here it is;

I salute the concept of "Big Society". It has focused attention on the work of charities and community organisations; our role in supporting the poor and vulnerable and in building a better society and a country at ease with itself. This is a noble aim. But I am worried that your great ideal is about to be swamped by a growing tidal wave of growing needs and rising cuts.

Do you realise the perfect storm that confronts our country's charities? Rising costs, higher tax bills because you have raised VAT and are removing gift aid transitional reliefs, on top of swinging cuts in funding. This is impairing our ability to support those most in need. As we face cuts, we also face increased demand for our services. Every cut has a consequence. And those consequences are being played out in the lives of individuals and on the streets of our communities. You saw this yourself recently in the tragic case of the disabled child denied caring support. That was but the tip of the iceberg to confront our sector.

Big Society has for too long been promoted as a Utopian ideal with calls for more giving and more volunteering. But the reality is the hard grind of charities trying to provide services for more, against cuts in their funding.

So is it a surprise that people now see "Big Society" as more a soundbite than Programme for Government? The rising tide of cynicism in our charity and voluntary sector may overwhelm what ought to mark a renaissance for civil society, unless you act.

What should you do? First you must halt the rising tide of cuts. Indeed reverse it; invest more in our sectors' brilliant ability to provide more cost effective and citizen focused public services. Take a bold step in establishing a Big Society Bank with billions of pounds, not pennies, to build a resilient charity sector. Work with our established sector instead of bypassing and ignoring us.

My challenge for you would be to spend a week running one of the countries top charities; confronting the reality of the demands we face in the face of swinging cuts. In Barnardos or Shelter, for example; see the reality of trying to provide for a better society,when the State is withdrawing it's funding. Big Society is hitting the buffers. Rescue it!

As you see my "open letter" suggests the PM should spend a week running a charity like Shelter or Barnardo's. The joke round the office is that Cameron has agreed - but wants to do it at ACEVO. And it's a full on job swap. I'll run the country for a week. Good idea me thinks!!!

I managed to produce this after a rather splendid Sunday lunch I has laid on for two old friends, John Rafferty and Stephen Shields. I had met them for Mass at St Marys's Church, Clapham. John, a distinguished organist was playing and Stephen was singing.

John Rafferty was a colleague from the Charities Board days; he was the Scotland Director. Stephen was the guy who ran the brilliant "Awards for all" scheme which was based on a quick and simple process to get money out to charities pronto and without fuss. Stephen now runs that superb charity, "Shine". SHINE is a dynamic young charity set up to fund educational support programmes for children and young people from the most disadvantaged parts of London and Manchester. It works by funding best practice educational support projects to ensure that the participants can have choice and control in their lives. (John is now more widely known for his walking guides to pilgrimages, particularly to Santiago de Compostela.) 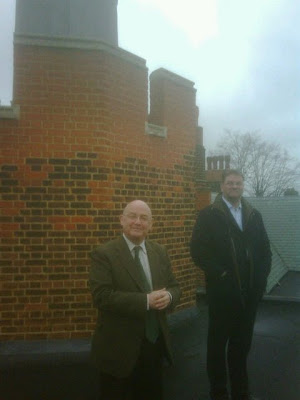 St Mary's Clapham, which is in the very Ward I used to represent when I was on Lambeth Council many a moon ago, is a splendid Redemptorist Church and Monastery. It has various charitable activities attached, like a great charity shop and work with the homeless. The Redemptorists are known for their outreach into the community and their down to earth, no nonsense approach to accepting people as they are and on their own terms. A very third sector style, I think.

And it proved useful having them at lunch in Clinks as I get the call from that marvellous journalist, Sam Coates, Deputy Political Editor of The Times, asking me to consider an article on the problems that the "Big Society" concept faces in the storm of cuts. Glad we had demolished the Boeuf Bourguignon before I got cracking writing it!

Shame on Patric for being so staid. I'm sure he could find a way to let you have a Malmsey butt of not a bottle of Krug.