The Pleasure of Dogs and Al Gore


Well, all heads of membership bodies should get out to see their members. And I do a lot of that; I rather enjoy it. But yesterday was a real treat. Going to see Clarissa Baldwin at the Dogs Trust centre at Harefield. I hadn't realised just how big the Dog's Trust is; with 16 centres across the UK and 800 full time staff and thousands of volunteers. Last year they handled 16,000 dogs. It is one of the biggest charities in the country. Their work is increasing as the recession bites; less people can afford to take a dog and more people are giving their dogs up. We were discussing the repugnant bedroom tax and wondering if that would increase their workload.

It’s a tribute to the leadership of Clarissa Baldwin, who has been CEO for a remarkable period since 1986 that the organisation has grown. It has achieved some great successes- for example in persuading the Government to go for micro chipping all dogs (obviously the Hound has one!). She has developed an international standing and the Trust does work supporting the development of similar bodies elsewhere. She was telling me they support work to stop the disgusting and barbaric practice of keeping dogs in barrels in Greece.

I even acquired a rather smart dog car harness, though the Hound turned up her nose when I showed it to her. She is rather sniffy about wearing a harness, but I've always been worried about what would happen in a crash; I'd be protected with a seat belt and Madam would go hurtling through the windscreen. So she will have to lump it.

Then it was back into London for a secret meeting at DH to hear about the results of Monitor's Fair Playing field review (can’t say what it is or they’ll cut off my hands). Then off to a "Fair Pensions” do at the Guildhall; main attraction being that Al Gore was speaking. He was doing his stump speech on climate change. He is almost Old Testament prophet on all this; but impressive none the less. And he even managed to connect it all up with pension funds being more responsible about their investments. There were some Foundations in the audience. Hope they were listening well. 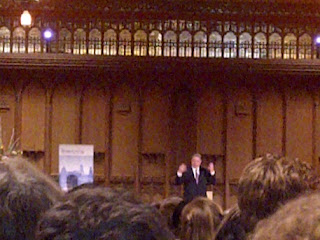 A strong gathering of sector big wigs afterwards so a great opportunity to schmooze, gossip and do the occasional bit of lobbying!  Home late after a satisfying meal with Head Hunter honcho Fielding at the old Nat West Tower. He was telling me all about a recent triumph in appointing a rather distinguished Chair!