Resting in Edinburgh and children

I have been having a few days rest and recovery! It was probably the third ACEVO member who said to me at our recent summit "you’re looking tired" that did it! So I decamped to Edinburgh; one of the world's greatest cities, to recuperate. I even managed to keep off the blackberry for some time whilst enjoying the delights of the galleries and shops of this glorious Capital. An extremely agreeable lunch at the New Club on Princes Street was just what the doctor ordered!

I arrived home to find my copy of Third Sector magazine waiting for me. Well I guess the cartoon all over the front page is fun! Even if I do look like I've been hammering the Champagne. I'm in touch with the cartoonist to purchase it for the Office! 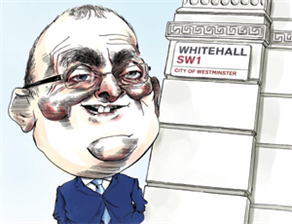 And while away the troops have been busy producing yet another stunning report. Is there no end to the talent and energy of team ACEVO? And now I am returned it will be redoubled efforts and even more working parties (though Dr Kyle tells me he has packed my diary with meetings to stop me having too many ideas and causing too much disruption in the office!)

This time it is the publication of a report of our early years task force, chaired by the redoubtable Anne Longfield, the CEO of 4Children. It argues that third sector organisations must be more consistently involved in policy decisions about children’s services if the government is serious about improving them.

The report, One million reasons for reform, (see here) calls for a culture change in the government so the sector is consistently engaged in policy-making on children’s services.

"The emergence of a new Children’s Improvement Board in helping design and implement reform of early years, without any voluntary sector representation, shows that old habits die hard," it says.

"If the government is serious about transformation and voluntary sector engagement, it needs to ensure that voluntary organisations are around the top table as well as traditional players such as local authorities."

It adds that payment by results must be additional rather than a final payment, so that organisations without the capital necessary to invest in services can still win contracts.

The report also calls on the government to ring-fence its Early Intervention Grant, a fund for councils to run services for children, families and young people, because funds are failing to reach front-line services and it is causing services to close.

And it points out that there are serious barriers to charities competing with public and private sector organisations to deliver children’s services, such as their inability to reclaim VAT.

The VAT issue really does need to be sorted. But I’m glad that HMRC has finally announced its long-awaited consultation on exempting charities who share services from VAT. This was one of the recommendations of our Commission on Big Society and an issue I’ve pushed many times with ministers. Good to see action on it at last.