Well, what a week! I started it off with telling the Prime Minister about the damage the cuts are doing to charities and I ended the week telling HM The Queen about cuts to charities. HM asked about ACEVO and said to me charities seemed to be having a hard time. I told her that our Chief Executives were indeed having a difficult time and there was real worry in the sector.

I have to admit I was a little more nervous talking to my Sovereign than I was to her Prime Minister!

We decided to go down a day early so I did not spend the small hours fussing about; so my parents and I were able to go to st George's Chapel in Windsor Castle for Evensong. The choir is superb and the singing of Tippett's adaptation of the Negro Spiritual "steel away" was moving (and it helped calm the nerves).

But it was certainly nerve-racking and thrilling all at the same time when I finally made it into the Castle for the Investiture!

The rehearsal was amusing. I had to rehearse kneeling and standing up and the three steps back and bow. I did it well.

There is something special about kneeling in front of your Sovereign, but I was hoping the sword didn't slip and give a whole new meaning to the cuts to charity! The only disappointment is that HM does not actually say "Arise Sir Stephen".

We were in the Waterloo Chamber of the Castle, with those magnificent pictures of the heroes of the glorious defeat of the French all around. And then it was off with all family for lunch at the Sir Christopher Wren House Hotel.....

And here for your delectation are the photos. 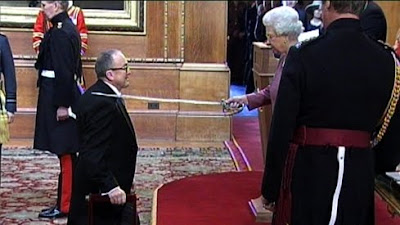 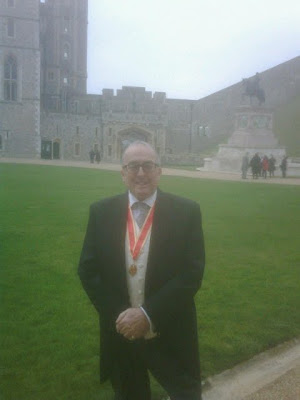 With Ma and Pa 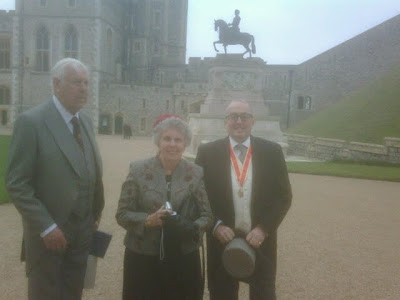 With my Mother, Brother and two Sisters 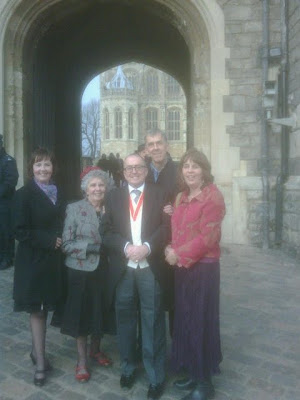