Funny that, I thought on seeing the report of the NCVO Funding Commission. Where have I heard that before? And of course it was the title of the famous ACEVO report on core costs and full cost recovery. Imitation is the sincerest form of flattery as they say! 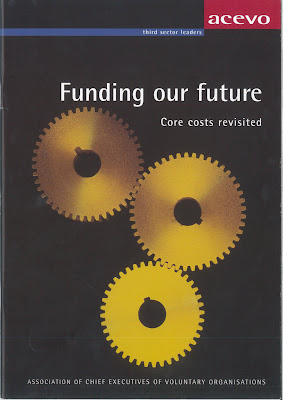 And perhaps not surprising as Richard Gutch, the Secretary of it, was a former ACEVO Chair when he led Arthritis Care. So none the worse for that.

This is a valuable report; clear recommendations and mapping future needs and developments. Also a thorough mapping of past trends and useful information about sector financing.

The stress on a major expansion of social capital is right. I would have given this more prominence and frankly I'm not sure the scale they suggest is anything like that which we need.

I'm not sure the incremental approach is necessarily always right and I thought Third Sector's Editor Stephen Cook's description of "an exercise in the art of the possible" a good one. Given constraints I understand that but if this sector is not about impossible dreams happening we should all put on our carpet slippers.

The emphasis given to rationalisation and mergers is another good prod forward. And a prod to us at the top to work together. Another call for rationalisation is needed and should be supported: as we are doing in ACEVO with our recent superb guide to mergers. But the idea of a £60m restructuring fund and small Big Society grants are hardly radical though helpful.

There is also perhaps a little too much of the recommending how every one should spend their money and do saintly things.

The next decade will see a premium on organisations diversifying income streams, not relying on grants and discovering the power of loans. Umbrella bodies will need to be lean and efficient - trading up and helping sector bodies to scale up. If we can't break into the capital markets then this report is just about tinkering at the edge. No harm in that; it's needed. But loans and new mechanism like impact bonds, social stock exchange are where the future lies. They say it should be possible to attract £10b into the sector over the next decade. For real growth this is still small scale.

Let's remember that at the close of the Futurebuilders programme applications were running at £90m per month - or over £1b a year just for this programme. So demand is significantly in excess of that and Government looks to us to do more. £10b is simply small scale. May sound large but chicken feed in the scale of public spending.

Just as the ACEVO "Funding our Future" report radicalised revenue funding from the State and adopted FCR as the way to fund, we now need to see a revolution in access to capital. That's the Big frontier to cross. That's what should have been the Big recommendation of the twelve!

I don't want to quibble,Stephen, but the Funding Commission report is called Funding the Future, not Funding our Future.

Nice to hear you remembering I was a former chair of Acevo. When I was chair (before your time), I commisioned the first Acevo report on core costs called 'Who pays for core costs? by Julia Unwin (1999). you then commissioned a follow up report a few years later.

So who's copying who?

You are right Richard. I'm banged to rights.